Emails Show Trump's Son Expected Russian Information on Clinton
Newly released emails show that a son of U.S. President Donald Trump wanted to meet with a Russian lawyer during the 2016 election campaign.
Donald Trump Junior was hoping the lawyer would provide damaging information about former Secretary of State Hillary Clinton. At the time, she and his father were the leading candidates for president.
On Tuesday, Trump Jr. released a series of emails that he said led to the meeting. The release followed a report in The New York Times newspaper. The son described his action as an effort "to be totally transparent."
The emails came as Special Counsel Robert Mueller and several congressional committees explore Russian involvement in the presidential election.
U.S. intelligence agencies have said that Russian President Vladimir Putin personally directed a campaign to damage Clinton's image and to help Trump.
The email exchange
The email exchange between Trump Jr. and American music publicist Rob Goldstone took place in June 2016. Goldstone said he was representing Natalia Veselnitskaya, a Russian lawyer.
Goldstone described Veselnitskaya as a "Russian government attorney." He said she has "information that would incriminate Hillary" and that the information "is part of Russia and its government's support for Mr. Trump."
Reacting to the email, Trump Jr. wrote back "If it's what you say, I love it."
He also wrote that people attending the meeting "will likely be Paul Manafort (campaign boss) my brother in law and me."
At the time, Manafort was head of the Trump election campaign. Jared Kushner, Trump Jr.'s brother-in-law, now serves as a top White House advisor.
In one of the emails, Goldstone wrote "I can also send this info to your father via Rhona." Rhona Graff is said to be a long-time personal assistant to the current president.
Trump Jr. has said different things about the talks with Veselnitskaya and its purpose.
On Saturday, he said it was a "short introductory meeting" about adoptions of Russian children by American families.
A day later, Trump Jr. changed his story, saying that he was told before the meeting that Veselnitskaya might have information "helpful" to the Trump campaign.
On Tuesday, Trump Jr. said on Twitter he believes the information about Clinton was "Political Opposition Research." He added, the attorney, "as she has said publicly, was not a government official. And, as we have said, she had no information to provide and wanted to talk about adoption policy and the Magnitsky Act."
Reactions to the emails
Ron Wyden, a senator from Oregon, is a member of the Democratic Party. He said the newly released emails "show there is no longer a question of whether this campaign sought to collude with a hostile foreign power to subvert America's democracy."
Republican Senator Lindsey Graham says that the younger Trump "definitely has to testify" before a Senate committee exploring Russian interference.
Sara Huckabee Sanders is deputy press secretary in the Trump White House. She read a short statement from the president to reporters. In the statement, Trump said his son is "a high-quality person," and he praises "his transparency."
I'm Ashley Thompson.

Now I meet with fewer difficulties in my work.
现在我工作中困难少些了|P4aZ9l9n4(。

If she had the chance to do it over, she would have hired a press secretary.
如果有机会重头来过，她会雇一个新闻秘书U,vS#V&nZwu_Ku。

She no longer feared that they should misunderstand her.
她不再害怕他们会误解她了WTgrKq7d7Oj|Vy3。

He serves as an interpreter for us.
他给我们当翻译QPRZ,3d3RBVDOt。

The interview took place on a Friday afternoon.
采访是在一个星期五的下午进行的X7spI)7vF|;cSg。
Another dust-up took place in the teahouse.
茶馆里又发生了一场打斗|yqIAP8|js(2q8y3o-a。

2.At the time, Manafort was head of the Trump election campaign.

I was out of work at the time.
那时我失业了#NH3BPqrC~*go)。
I was not in Britain at the time.
当时我不在英国wTsgkbtB8C%YLoJWK6R。 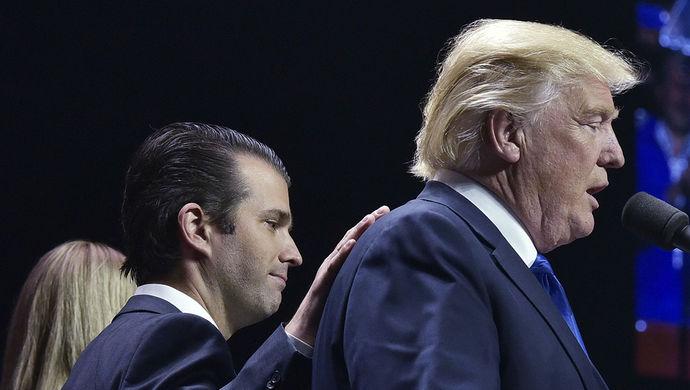