Could You 'Beat the Freeze?'
This is What's Trending Today...
American Nigel Talton is a fast runner.
He can run 100 meters in just over 10 seconds. And he can travel a distance of 200 meters in a little more than 21 seconds.
Talton was a good runner in college. The 26-year-old thought if he ran just a little faster, he might have a chance at being chosen for the United States Olympic team.
While he was not chosen for the Olympic team last summer, he is getting a lot of attention this summer.
Talton lives in Atlanta, Georgia, where he works for Major League Baseball's Atlanta Braves.
He is a member of the Braves' grounds crew, which means he helps keep the field in good condition for the games. The work involves cutting grass and painting lines on the field.
But Talton's running helped him get another job at the team's games.
He puts on in a light green suit and places blue goggles over his eyes. He looks kind of like a movie superhero.
And his job is to run. Fast.
Talton is known as The Freeze. At some of the Braves' games, he runs in an event called "Beat The Freeze."
The event is advertising for a local gas station that sells a frozen drink called a freeze.
A baseball fan at the game is chosen to race against The Freeze from left field to right field. The chosen fan gets a big head start.
In one recent game, a young man was about one third of the way across the field when Talton started running. When the fan neared the finish line, he started celebrating. He thought he was going to win. But Talton was catching up. With about five steps to go, the man looked over his shoulder and saw The Freeze.
The fan was shocked, and fell down. He did not "Beat The Freeze."
A baseball fan posted video of that race on Twitter last Friday.
Since then, the video has received almost 200,000 likes and retweets. Sports broadcaster ESPN, The Washington Post and USA Today have written stories about Nigel Talton and the race.
Any fan that beats The Freeze gets a prize worth $100. One fan did win, but that was because of a mix-up. Talton did not get the signal to start running.
There are 20 more "Beat the Freeze" races left this season.
Talton told The Washington Post that after the baseball season ends, his goal is to earn a place on Team USA for the 2018 indoor track and field world championships in England.
And that's What's Trending Today.
I'm Ashley Thompson.

In Los Angeles, the neighborhood known as Watts erupted into riots.
在洛杉矶，一个叫做沃茨的街区爆发了动乱yf)Ei%BC!%。

Track and field sports have dual features of competition and body building.
田径运动具有竞技性和健身性双重属性J.Ljn_U_An-q,I。

You might try the gas station down the street.
你可以到街那头的加油站试试UA8i~p]&8gI23lNxd。

They have little confidence that they can earn a place at a university.
他们几乎没有信心能够在大学赢得一席之地K94jb],-cTRu-DyDpL。

1.He is a member of the Braves' grounds crew, which means he helps keep the field in good condition for the games.

2.While he was not chosen for the Olympic team last summer, he is getting a lot of attention this summer.

getting a lot of attention 受到广泛关注 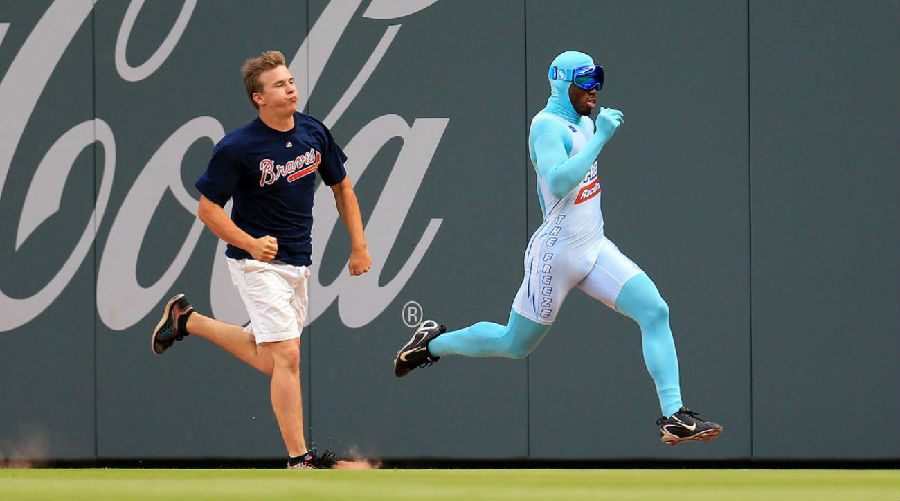