Children of 'BBC Dad' Inspire New Show
This is What's Trending Today.
Do you remember Robert E. Kelly? He is the professor from South Korea who quickly became world famous earlier this year.
On March 10, Kelly was giving an interview to the BBC about the impeachment of President Park Geun-hye when his two young children burst into his home office.
His four-year-old daughter, Marion, opened the door to Kelly's home office and marched confidently up to her father. Her baby brother, James, followed. He entered the room in a walker, a device with wheels for babies who cannot yet walk.
Not long after, Kelly's wife, Jeong-ah Kim, ran into the office. She quickly tried to gather the children so that Kelly could continue with his interview.
The video of Kelly's interview spread quickly on the Internet. In two days, more than 20 million people watched it.
The incident started an online discussion about the roles of men and women, and whether Kim should have been so concerned about the children interrupting Kelly's interview.
An Australian television comedy show even made a parody video of the moment. Only this time, the politics expert was the mother.
A few days after the BBC interview, the whole Kelly family held a news conference and appeared together on several television news programs. Many people who watched these talked about young Marion's stylish look. She wore glasses and a trench coat.
Now, about six weeks later, the New York Times has an update on the Kellys.
The Times reported that the Kelly kids inspired an animated show. It is called "The Adventures of Mina and Jack." Two New Yorkers are producing the show.
The first episode is short; it runs less than three minutes. In the video, Mina and Jack join their father on a business trip and help catch a thief who stole bars of gold.
The creators are hoping the show may someday run on children's television networks.
The Kellys themselves have nothing to do with the cartoon show. But they say they enjoy it.
So far the video has about 200,000 views on YouTube. And many who have watched the episode wrote that they hope "The Adventures of Mina and Jack" becomes a full television series.
And that's What's Trending Today.
I'm Dan Friedell.

So far no one has admitted planting the bomb.
到目前为止，还没有人承认是自己放了炸弹lb3@S-[V[7SV)。

She has got some free tickets to the comedy show.
她有这场喜剧表演的一些免费入场券aqhO16Ws5IEpJ+p^ns62。

We are naturally concerned about the future.
我们自然对未来感到担心s_yIalkjU1。

Not long after that, she had a baby girl.
过了不久，她生下了一个女婴pE-VR=gImfE%LtSshj@I。

1.On March 10, Kelly was giving an interview to the BBC about the impeachment of President Park Geun-hye when his two young children burst into his home office.

She burst into tears and ran from the kitchen.
她突然哭起来，跑出了厨房,dqQ9tkzCY917HPd,6c。
This weekend's fighting is threatening to burst into full-scale war.
本周末的冲突有升级成全面战争的危险R2&Xhw)^dd~UH7]R。

2.The Kellys themselves have nothing to do with the cartoon show. But they say they enjoy it.

have nothing to do with 与...无关 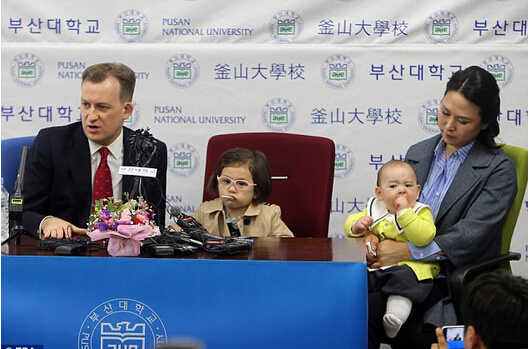