It’s a Boy! April the Giraffe’s Baby Is Born
This is What's Trending Today.
Millions of people have been eagerly waiting for April, a giraffe living at a zoo in New York State, to have her baby. Viewers were rewarded on Saturday: at about 10 a.m. April gave birth to a male calf.
The birth was filmed and shown live on YouTube. About 1 million people watched it.
The zoo first posted live video of pregnant April in her pen on YouTube in late February. People who object to zoos complained to YouTube, which took down the video. But stopping the video attracted even more interest.
After investigating, YouTube returned the video and allowed it to remain online.
The New York Times called April "an internet star." Millions of people have checked on April at some point in the last two months. At its peak, April's live camera on YouTube had almost 5 million viewers per day.
But after a while, many people wondered if the baby giraffe would ever be born. Some even proposed April was not really pregnant.
One fan said he followed April's story for 10 weeks.
David Chase used Facebook to write: "I've been watching 10 weeks, who says guys can't commit?"
After the birth, many people just simply wrote: "Finally!"
The zoo said the baby and April are doing fine. The calf weighs 58.5 kilograms and is just under 1.8 meters tall.
The calf stood up about 45 minutes after he was born.
The zoo, called Animal Adventure Park, is located about 200 kilometers northwest of New York City. It is currently closed but fans of April and her new baby will be able to visit when the park re-opens in mid-May.
The zoo has not yet announced the calf's name.
And that's What's Trending Today.
I'm Dan Friedell.

He stood up and objected in strong terms.
他站起身，强烈地表示反对ZJ!oth5d;Ilho_4K5h=。

After a while he started to doze.
过了一会儿，他便鼾声大作了E,sfcI#jrrD9d。

Frankenlouie is already an internet star who has notched up thousands of hits on You Tube.
弗兰克已经成了网络明星，在You Tube（美国视频网站）上引来了成千上万的点击量#YMU=ErAB5aPv。

They live video game system that can enhance the visibility.
他们的视频直播系统更能提高比赛的知名度6HC.XhV|SDGR|9。

1.Viewers were rewarded on Saturday: at about 10 a.m. April gave birth to a male calf.

2.People who object to zoos complained to YouTube, which took down the video.

I took down the curtains, washed, and starched them.
我摘下窗帘，洗了洗，然后给它们上了浆lr]^(WoCNU。
She took down the tablets in one gulp.
她把那些药片一口吞了下去HmltjG9;w&J9gP。 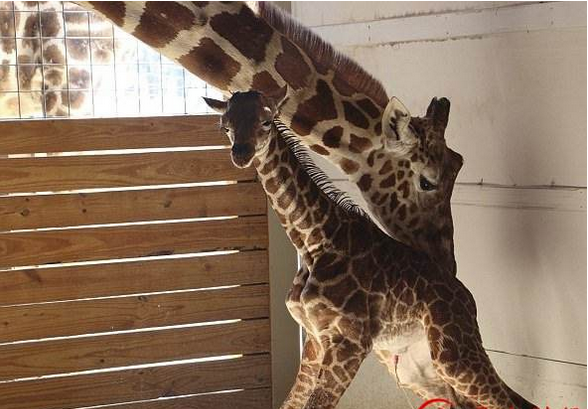