Japan Proposes Overtime Limit to Fight ‘Death from Overwork’
Japan's government has proposed new limits on the amount of overtime employees can work.
The restrictions would cap overtime to 100 hours per month and 720 hours per year. The plan is supported by Prime Minister Shinzo Abe and the reforms are expected to eventually be approved by parliament.
The government has said the overtime limits aim to fight what the Japanese call "karoshi," or death from overwork.
Japan's business culture has a long history of demanding that employees work many hours of overtime. An online survey last year also found that most Japanese workers only take about half the number of vacation days they are given.
The dangers of long working hours were highlighted by the 2015 death of an employee at Japanese advertising company Dentsu. The 24-year-old female employee committed suicide after complaining to family about the long hours she had to work.
Public outrage over the woman's death led to the resignation of Dentsu's CEO last January. The company's new chief has pledged to obey all labor laws and carry out reforms to protect the health and safety of employees.
Michael Cucek is with Temple University's Japan Campus. He says efforts by the Japanese government to improve conditions for workers are seen as a good thing. However, he and some Japanese activist groups believe the proposed limits are too high to truly make life better for employees.
"The number is absurd - that in a single month, one can have 100 hours of overtime, is simply a ridiculous number."
A government report said last year that about one in five Japanese companies have employees who work such long hours that they are at serious risk of death.
The report found that nearly 23 percent of companies had some employees working over 80 hours of overtime a month. Medical officials have noted a greater possibility of death from work among people working at least 80 overtime hours per month.
The survey also showed that about 21 percent of Japanese employees work an average of 49 or more hours each week. That number compares to 16 percent of American, 13 percent of British and 10 percent of French employees.
Cucek says the woman who killed herself while working at Dentsu is an example of how work isolates many Japanese workers.
"She was living not at home, but in a corporate dormitory. So there was never anybody to talk to. Never any way of her breaking out of the environment where ‘you must work, you must work, you must work,' was being pressed upon her."
He said he hopes new overtime rules will send a clear message to Japanese companies that they can no longer demand an environment leading to employee health problems and death.
I'm Alice Bryant.

They aim to clear every dealer from the street.
他们打算把街上所有的毒品贩子都清走Z59..jMtM!。

After about three months, I was no longer addicted to nicotine.
大约3个月后，我就不再对尼古丁上瘾了!%%7j6NWsNNa(Rjwip。

After breaking out of the jail, he hid out in a deserted farmhouse.
他越狱后，暗藏在一个无人居住的农舍里LU.H.WUG@j^N。

Coca-Cola has struck up partnerships with at least some of these activist groups.
可口可乐公司至少已经和这些激进组织中的几个建立了合作关系P68Z!R2&b%。

1.A government report said last year that about one in five Japanese companies have employees who work such long hours that they are at serious risk of death.

He saved three children alive at risk of his life.
他拼命救出了三个孩子Xo)bx@pSPOWK。
An estimated seven million people are at risk of starvation.
估计有700万人面临着饿死的危险MTV_CSXjm;na。

2.The 24-year-old female employee committed suicide after complaining to family about the long hours she had to work. 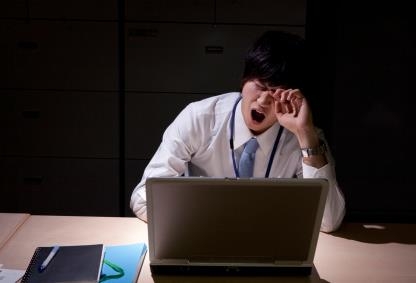