Trump Hosts a Major Event … for Children
President Donald Trump returned to Washington, DC on Monday for a very important event.
It was not for a meeting with an international leader.
And it was not for a joint session of Congress.
No, on this day, Trump greeted thousands of children. They had come to the White House for the annual Easter Egg Roll.
The event has been a U.S. tradition for more than a century. In the late 1800s, local children gathered on the hill beside the president's house to play a game with their colored eggs following the Easter holiday.
The White House Easter Egg Roll was of special interest this year. The Trump administration was very late to organize it. Some people who hoped to attend the event were even worried that it would be canceled.
Political observers said the Easter Egg Roll would show how well Trump's administration could plan and operate a complex public relations event.
Talk about the event also brought attention to the first lady, whose office usually plans the White House Easter Egg Roll. First Lady Melania Trump has not yet moved to Washington, DC. She says she will remain in New York City until her son finishes the school year.
So, how did the White House Easter Egg Roll go this year?
Just fine, early reports say.
About 21,000 children and their families received tickets to this year's event. They came in small groups to the lawn near the president's house. They played soccer, tossed bean bags and, of course, pushed hard-boiled eggs down the hill.
The event was smaller than in previous years. Last year, for example, about 36,000 people attended.
This year's Easter Egg Roll also did not include performances by top celebrities or professional athletes. Instead, children were invited to draw pictures for U.S. soldiers.
The Easter Bunny made an appearance, though, as did both Trump and the first lady. They were there with their 11-year-old son, Barron. The president welcomed his young guests and promised them that the nation was getting stronger, bigger, and better.
I'm Kelly Jean Kelly.

The Olympics this year will have stiff competition because they are allowing professional athletes to compete.
今年的奥林匹克运动会将出现激烈的竞争，因为他们准备让职业的运动员参赛VxMpoD25.F3M;^g.6k。

Sales this year exceeded the total for the two previous years.
今年的销售额超过了上两年的总数J(qL5)kuENM*FueDk。

The coach checked in the football uniforms at end of the school year.
在学年结束时，教练把足球球衣收回并登记BP5-HBL_d5__aD9E3E。

2.The Easter Bunny made an appearance, though, as did both Trump and the first lady. 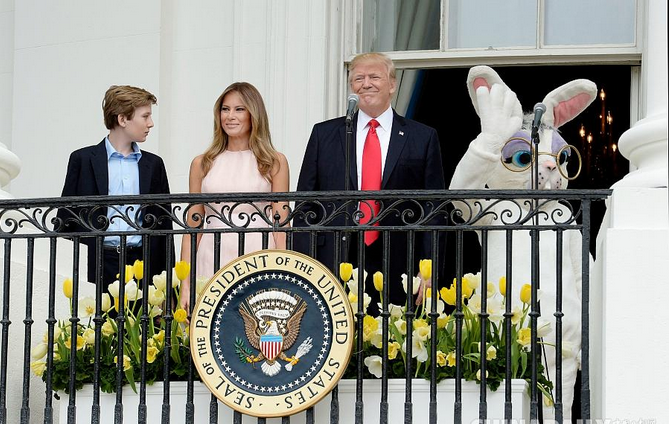