US Doctors Successfully Operate on Baby With Four Legs
Doctors at an American hospital have successfully operated on a baby born with four legs and two spines.
The 10-month old baby girl is known only as ‘Dominique' from Ivory Coast. She is reported to be recovering well.
Doctors separated her from a parasitic twin in a complex operation on March 8 at Advocate Children's Hospital in Park Ridge, Illinois.
Hospital officials say the operation lasted six hours. It involved five surgeons and many other healthcare workers.
The bottom half of the not-fully-developed twin's body was sticking out from Dominque's neck and back. The twin was dependent on Dominque's body and could not survive independently.
Dr. John Ruge is a child care specialist.
"This is a situation where identical twins failed to separate. And, the separation, it can be connected in a variety of different manners."
Dominique was born with two spinal columns. Without an operation her life would likely not be a long one with physical problems and pain, doctors said. They were concerned about the pressure put upon Dominique's back and organs.
Doctor Ruge says her heart and lungs were working to support two bodies.
"It is as if the twin, from the waist down, had been attached to the back of Dominique's neck. And, there was a pelvis and bladder, and functional legs that moved, and feet coming out of the back of Dominique's neck. Now, this made it extremely dangerous for Dominique."
Doctors used imaging equipment to create a three-dimensional model of her two spines. A second bladder behind the extra legs had to be removed.
The team of surgeons performed a test operation to prepare for the surgery. In the real operation, doctors disconnected nerves and blood passages to prevent feelings of numbness or even paralysis.
Dr. Frank Vicari was also part of the surgical team.
"So, we took her to the operating room. We approached the problem, the critical part being at the base of the junction of the two spines and the abnormal pelvis. And, once we had control of that, I think it was pretty clear to most people in the operating room that we were going to be able to accomplish this surgery."
Dominique was able to sit up the day after the surgery and was released from the hospital five days later. She is now recovering at the home of a foster family in Chicago. They will care for her until she is well enough to return home to her family in Africa.
Doctors do believe that baby Dominique will be able to have a normal and productive life.
I'm Marsha James.

His explanation is suggestive of fetus in fetu(fetus within in a fetus), sometimes known as a "parasitic twin".
他的解释暗含了胎中胎的一些想法，也可以成为“寄生胎”|9K,yc20XKvBG。

Her head spins dizzily as soon as she sits up.
她一坐起身来就感到天旋地转pk&.]pSp7UJg)qh。

She made a face and stuck out her tongue at him
她做了个鬼脸，向他吐了吐舌头k+#SLK.eZVr。

1.They were concerned about the pressure put upon Dominique's back and organs.

Volunteers from all walks of life are feeling put upon.
来自各行各业的志愿者们感到被欺骗了m1Ew7]dV6u。
He believes we were put upon this earth for a purpose.
他认为我们来到这个世界是有目的的6kwMFCgOVA&yer7l。

2.And, the separation, it can be connected in a variety of different manners."

We're moving forward on a variety of fronts.
我们正在多个方面向前推进wf,^]P!r35xl]4k)eE。
We have had occasion to deal with members of the group on a variety of charges.
我们有必要以多项罪名起诉该组织的成员-&r3oqK)wz。 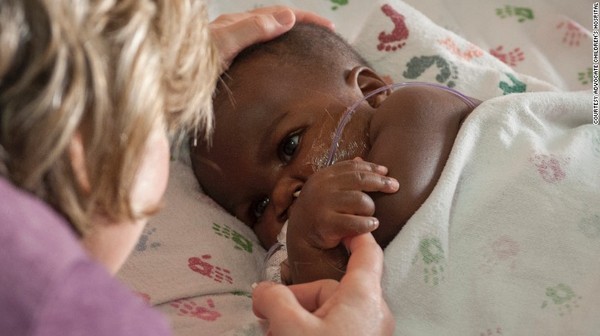