Latest Flooding in Peru Turns Deadly
Fast-moving water spilled onto streets and into homes on Thursday during intense rainstorms in Lima, Peru's capital.
The heavy rains killed at least 12 people in Peru, the Associated Press reported. It said the water, much of it dirty, now threatens to flood the city.
Peruvian officials said on Thursday they expect the extreme weather to continue for another two weeks.
Weather experts are blaming the intense rains on the weather event called El Nino. It produces a warming of surface waters in the eastern Pacific Ocean.
To date, the storms are reported to have killed more than 60 people and destroyed 12,000 homes across Peru this year.
President Pedro Pablo Kuczynski has declared a state of emergency in the affected areas. He said the government is prepared to provide shelter and assistance to those left homeless by the storms.
Schools nationwide have suspended classes.
In the past three days, the rains and mudslides have brought severe destruction to Peru. And, the storms have caught people in Lima by surprise. The city, where it almost never rains, is home to 10 million people.
One extreme incident happened about 50 kilometers south of downtown Lima. Shocked city residents watched and captured video on their mobile phones as a woman escaped from a mixture of mud, wood and farm animals.
Evangelina Chamorro had just left her two daughters at school when, soon after, she and her husband were pulled into a landslide. They were feeding their pigs when the landslide seized control of them.
Armando Rivera, Chamorro's husband, told a Peruvian radio station that he and his wife climbed a tree but the tree broke in two. They held on to each other's hands, but Chamorro eventually lost hold and got separated.
Then, Chamorro appeared near a bridge, lifting herself from a flood of debris and walking toward land covered head to toe in mud.
"There's a person there!" an observer cried out.
Chamorro collapsed as she reached land and was quickly carried by several men to an emergency vehicle. She suffered only minor injuries.
Last week, during heavy rainfall, more than 15 people were killed when a bus fell into a ravine in central Peru, Alliance France-Presse reported.
This week in Lima, the rising Huaycoloro River washed away two trucks and nearly destroyed a bridge.
Seven of the nation's most dangerous criminals were temporarily transported to another detention center after a river near the prison threatened to overflow.
President Kuczynski said in a statement Wednesday that Peruvians should not take unnecessary risks. He urged them to avoid flooded roads and weak bridges.
I'm Alice Bryant.

Hart cried out as his head struck rock.
哈特的头撞到石头上，疼得他大叫起来nm0Q36Ftrg。

Weeks of heavy rain have washed away roads and bridges.
几周的大雨将道路和桥梁都冲垮了8ssqd*nN)sTnSk!!。

Totally exhausted, he tore his clothes off and fell into bed.
他疲惫至极，扯下衣服，一头倒在床上&Gt1xk~7wN]LI。

The heavy rains and flooding killed scores of livestock.
暴雨和大水淹死了许多牲口B(fSjIW3(QdE^x3sCLg=。

1.Then, Chamorro appeared near a bridge, lifting herself from a flood of debris and walking toward land covered head to toe in mud.

I saw Ken walking toward the station.
我看见肯向火车站走去#v%qSIg=n+r@Zc4Ty4T。
He was walking toward me with one hand holding a knife.
他手里拿着一把刀向我走来HDuS%5AW!|~IvEleM0。

2.Then, Chamorro appeared near a bridge, lifting herself from a flood of debris and walking toward land covered head to toe in mud. 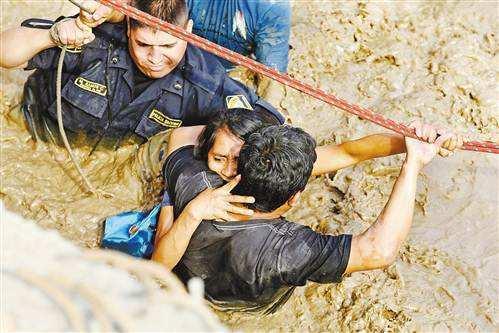