South Korea Leads List of Life Expectancy Gains
A new study predicts that South Korean women will be the first group in the world to have an average lifespan of more than 90 years.
Researchers at Imperial College London and the World Health Organization studied the lifespans of people in 35 industrialized countries. Their findings suggest that by 2030 people will be living longer. It also says the gap between men and women could start to close in most countries.
South Koreans living the longest
Women are predicted to live longer lives than men in all countries. Behind South Korean women, women in France, Japan, Spain and Switzerland are expected, on average, to live to age 88.
The life expectancy of South Korean men is expected to increase, but only to about age 84. In Australia, Switzerland, Canada and the Netherlands, men also are expected to live to about 84 on average.
According to the study, the increase in life expectancy in South Korea was caused by decreases in deaths from infections and long-term diseases in children and adults. The study says gains in life expectancy are a result of economic improvements in South Korea.
These gains have led to improved youth nutrition, increased access to primary and secondary health care, and the development of new medical technologies. South Koreans also have a lower body-mass index and blood pressure than people in most western countries, and lower smoking in women.
The U.S. is behind other developed countries
While women and men in South Korea led the study, Americans continued to have one of the lower life expectancies among developed countries.
Macedonia had the lowest life expectancy for women at nearly 78 years, and Serbia for men at about 73 years.
Men and women in the U.S. are predicted to have life expectancies of 80 and 83 years, about the same as Mexico and Croatia.
The writers of the study said life expectancy increases were smaller partly because of a lack of universal health care in the United States. The study also said problems such as relatively high child and maternal mortality rates, and high rates of homicide and obesity were to blame.
Changing expectations
Scientists once thought that a life expectancy beyond 90 years was impossible. However gains in medicine, combined with improved social programs, are helping people live longer lives.
These improvements are also happening in countries where people already live a long time, according to the study's lead researcher, Majid Ezzati of Imperial College London.
"I can imagine that there is a limit, but we are still very far from it,'' he said. Ezzati estimated that people would eventually survive on average to at least 110 or 120 years.
The study says that obesity, tobacco use and harmful alcohol use are the leading causes of death in adults. However, having an effective health care system is important for a country to improve life expectancy. The survey noted the good effects of having universal health-care coverage.
The study said that, with longer life expectancy, there will also be new pressures on health and social services. The number of people needing long-term care in their old age will increase, which will put stress on available facilities giving this care. The study suggests that either more facilities will need to be built, or health care may need to be provided at home.
There will also be additional pressure on pensions and social security. These are programs that provide money to people after they retire from work.
With people living longer, they will require more pension or social security payments than earlier generations. The study suggests that either the retirement age will need to be increased or plans will need to put in place to transition workers to retirement at a later age.
I'm Phil Dierking.

A large majority of elderly Americans depend solely on social security income.
大多数上了年纪的美国人仰仗社会保险金过活cU2WBEY2SbcbUA。

1.The writers of the study said life expectancy increases were smaller partly because of a lack of universal health care in the United States.

They had longer life expectancies than their parents.
他们比上一辈人的预期寿命要长Q[5KrP(P1em]Cw。
These countries also enjoy higher social mobility, life expectancy and life satisfaction than the US.
这些国家的社会流动性、预期寿命和生活满意度也都高于美国)^]|nkr5|&Jxd。

They're offended by the elaborate security measures the police have put in place.
他们被警方部署的繁复安全措施惹怒了*=tq0n4Tn~zLR。
The restrictions have been put in place, after a five-day national strike.
这项法令是在该国遭受了五天的全国性罢工后颁布的1hGviz@&*o4s+-。 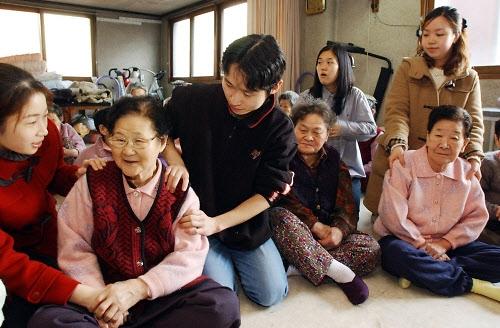