Scientists Discover 50,000-Year-Old 'Super Life' in Mexico
Scientists have found living organisms trapped in crystals that could be 50,000 years old.
The organisms were found in a hot, but beautiful cave system in Naica, Mexico. These ancient life forms can be seen only with a microscope. They are dormant, with all biological activity suspended inside the solid crystals.
Penelope Boston leads the Astrobiology Institute at NASA, the space agency of the United States. She says the ancient microbes were able to exist by eating minerals such as iron and manganese.
She spoke about the discovery recently at a meeting of the American Association for the Advancement of Science. If the findings are confirmed, they will show how microbes can survive in extreme conditions.
Researchers have been studying the microbes for nine years. But they have not reported their discovery in a scientific publication, and other scientists have yet to confirm the findings.
Penelope Boston plans to do more genetic tests on the microbes, which she revived both in the laboratory and in the Mexican caves.
40 strains of microbes, viruses
Forty different kinds of microbes and some viruses were found in the underground area. The genetic structures of these organisms are 10 percent different from those of their nearest relatives. Boston says that means their closest relative is about as genetically different as humans are from mushrooms growing in the forest.
The caves in Naica are 800 kilometers deep. They were once used for mining lead and zinc. Before the miners began working in the caves, the area was isolated from the surface and the outside world.
Some of the caves are as big as the large religious centers built during Europe's Middle Ages. There are crystals covering the walls. The caves are so hot that scientists must wear special clothing to keep cool. The clothing keeps the crystals safe from human germs or other damage.
Boston said the researchers could only work for about 20 minutes at a time before they had to go to a room that was 38 degrees Celsius to cool down.
No surprise in extreme life
NASA officials would not let Boston share her findings with scientific experts before last week's announcement. So scientists could not say much about the findings. But Norine Noonan, a biologist with the University of South Florida, said she believed them.
"Why are we surprised?" Noonan asked. "As a biologist, I would say life on Earth is extremely tough and extremely versatile."
The microbes are not the oldest life forms on Earth. Several years ago, scientists published studies about microbes that may be 500,000 years old and still alive. Boston says those microbes were trapped in ice and salt, not rock or crystal.
Other experts were asked to estimate the age of the Naica microbes. To do this, they looked at where the microbes were in the crystals and how fast those crystals grow.
Boston is also studying microbes commonly found inside caves in other countries, such as Ukraine and the United States. These microbes eat copper sulfate and appear to be impossible to kill. Boston said they show how difficult life on Earth can be.
I'm Jonathan Evans.

Although they coped well with the extreme conditions, they were too small for our needs.
虽然他们在这种极端的情况下将问题解决的很好，他们对我们的需要来说太小了BK&~P2SuI.O[8R0N3。

They took note that she showed no surprise at the news of the murder.
他们注意到她对谋杀的消息一点都不感到惊讶e17lL9yzj~y。

1.Before the miners began working in the caves, the area was isolated from the surface and the outside world.

Patients will be isolated from other people for between three days and one month after treatment.
治疗结束后，病人将与其他人隔离3天到1个月的时间he~q6[|IInF3V=。
Several villages in the north have been isolated from the outside world by heavy snowfalls.
北部有几个村庄因大雪而与外界隔绝了ZhXV0Q.,,aVd5XRNk3Ez。

2.Before the miners began working in the caves, the area was isolated from the surface and the outside world. 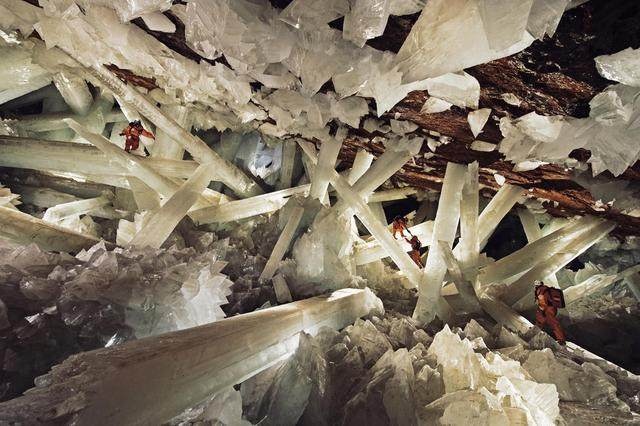