Iceland’s President Suggests Banning Pineapple on Pizza
This is What's Trending Today.
The last time this many people were talking about Iceland was in June, when the small country's soccer team defeated England in the Euro 2016 tournament.
People were talking about players like Sigurdsson and Sigthorsson, who each scored goals in the game.
Now, many people are talking about Johannesson. That is Gudni Johannesson, the President of Iceland.
Johannesson recently visited a high school. One of the students asked him what he thought about pineapple on pizza.
According to the Guardian newspaper, Johannesson answered questions on a range of topics, including his favorite soccer team. (Turns out it is Manchester United.)
He also said he was "fundamentally opposed" to pineapple on pizza. And he would ban it, if he could.
After the news of his opposition to pineapple made news around the world, he clarified his position on his Facebook page.
Johannesson wrote: "I like pineapples, just not on pizza."
He then explained that he was glad he did not have the power to ban pineapples from pizza. He said he would not like to live in a country that allowed its president to pass laws just because he did not like something.
People are still talking about pineapple on pizza, however. They wrote messages on Johannesson's Facebook page in both English and Icelandic.
One person wrote: "Thank you for saying out loud that pineapples shouldn't be allowed on pizzas!"
Another wrote: "I love pineapple on pizza, but I applaud your attitude to government."
And still another endorsed his support of Manchester United.
One radio program in Canada interviewed Sam Panopoulos. He is a Greek immigrant credited with adding pineapple to pizza.
He said in the 1950s and 1960s, nobody in Canada was eating very much pizza. And no one was mixing sweet and sour flavors.
Panopoulos said "it was plain, plain food."
But after he started putting pineapple on pizza, everything changed. Pizza became more interesting.
He sold pineapple pizza at his restaurant in Ontario, Canada for the next 40 or 45 years.
"You can put whatever you want on it, and everybody eats it," he said.
Now, we can thank the President of Iceland for the lesson on the history of pineapples on pizza.
And that's What's Trending Today.
I'm Dan Friedell.

We are talking about upping everybody's pay.
我们在谈提高大伙工资的问题tg]sHUND659%|P2=z_^b。

Bill had the courage to say out loud what everybody else in the room was thinking.
比尔敢于把房间里其他人在想的东西大声说出来4=dmk|&f!T!g。

She'll put the blame on us if it turns out badly.
如果这件事结果不好，她会怪我们的IJDN*13pqL|@~W5Q)jt。

1.According to the Guardian newspaper, Johannesson answered questions on a range of topics, including his favorite soccer team.

a range of 一系列

The slim booklets describe a range of services and facilities.
这些薄薄的小册子介绍了一系列服务和设施.hNDB&,Oa_PZz6q5]fI。
A range of ointments and creams is available for the treatment of eczema.
有一系列治疗湿疹的油膏和乳膏可以买到.BGH!3gHUqX。

2.He is a Greek immigrant credited with adding pineapple to pizza.

Madame Clicquot is credited with the perfection of this technique.
这项技术的完善要归功于凯歌夫人B[WqB;&eC^;V。
He's credited with having invented television.
电视机的发明要归功于他OIg_oh#22J0pO。 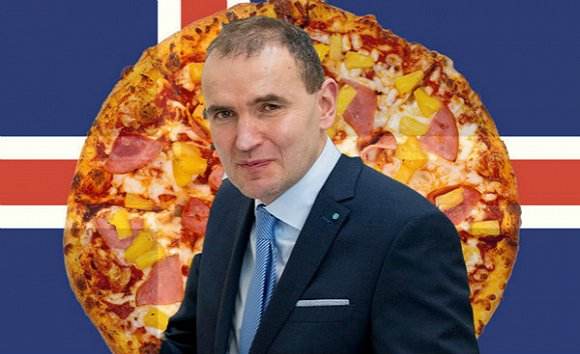