Hello' to Five Grammys for Adele
The British singer Adele was the big winner at the 59th Grammy Awards in Los Angeles Sunday night.
Adele won three major awards: album of the year for "25," as well as record of the year and song of the year, for the single "Hello."
Beyonce was among the competition for all three Grammys. Adele expressed shock that she received the honors over Beyonce.
"My dream and my idol is Queen Bey, and I adore you," she said. "You move my soul every single day, and you have done for 17 years."
Adele also won awards for the best popular performance by a single artist and best pop vocal album.
Earlier in the show, Beyonce gave a performance that recognized mothers everywhere. The singer, who is pregnant with two babies, won the award for best urban contemporary album for "Lemonade."
The Grammy Awards show is the biggest night of the year for the American music industry. Among the many performances was a surprising combination of pop star Lady Gaga and heavy metal band Metallica.
There were also performances in honor of artists who died in 2016. The band The Time and singer Bruno Mars performed several Prince songs including "Let's Go Crazy."
Adele performed in honor of George Michael, who died on Christmas Day. She was not satisfied with her singing at first, so she stopped her performance and began again. She told the crowd, "I can't mess this up for him (Michael)."
Chance the Rapper won three Grammys, including best new artist. He did this without selling a single record or music download. The 23-year-old hip-hop artist releases his music only through streaming.
David Bowie won Grammys for best rock performance and best rock song for his recording of "Blackstar." The singer died in January 2016.
Solange Knowles, Beyonce's little sister, won the Grammy for the best rhythm and blues performance for "Cranes in the Sky."
And Maren Morris won the best country song performance for "My Church." Morris said in her acceptance speech that she took part in the recording industry's first Grammy Camp 11 years ago. The camp program teaches young people about the music business.
Hours before the awards ceremony, came news that American singer Al Jarreau had died at a Los Angeles hospital. No cause of death was given. He was 76 years old.
Jarreau had won seven Grammy awards himself over the years.
He was admitted to the hospital last week for what doctors described as exhaustion. His Facebook page reported last Friday that he had been "recovering slowly and steadily." But it said he had been forced to cancel his remaining performance dates for 2017.
Jarreau was considered one of jazz's greatest singers. His hits included "We're in This Love Together," "After All," and "Moonlighting."
I'm Dorothy Gundy.

The web may even save some mini-languages, but the big winner will be English.
网络可能甚至拯救一些微语言，可是大赢家还是英语Kiik%Q~PY%q。

He will be attending next week's American Grammy Awards in feverish anticipation.
他将带着紧张兴奋的期待出席下周的美国格莱美奖颁奖Y(2w|;7|lyz。

She can play tennis as well as basketball.
她也会打篮球，也会打网球,S3-=f=&nlQ2。

1.Adele performed in honor of George Michael, who died on Christmas Day.

They erected a memorial in honor of the martyrs.
他们为烈士建了纪念碑Du3X=YF#x!Q21。
I will kill you in honor of my master!
我要杀了你，为主人报仇！

2.Morris said in her acceptance speech that she took part in the recording industry's first Grammy Camp 11 years ago.

Three-quarters of the country's workers took part in the strike.
该国有3/4的工人参加了这次罢工UJZejENzKRI3~EDXC|xN。
She took part in a BBC radio phone-in programme.
她参加了英国广播公司听众来电参与节目Vsi[JIfeRQX=fcJ6e(I。 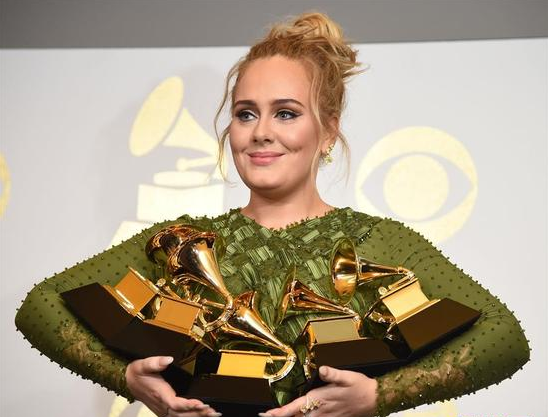