World’s Most Powerful Drug Trafficker Awaits Trial In New York
United States officials are preparing to try a Mexican man who has been called the world's most powerful drug trafficker.
Joaquín Archivaldo Guzmán Loera, better known as "El Chapo," will be tried in New York City.
Guzmán is the head of Mexico's Sinaloa drug cartel. Mexican officials have jailed him not once, but twice, at maximum security prisons. But he escaped both times.
Last month, Mexico sent Guzmán to New York, one of several American states in which he faces criminal charges.
Robert Capers is the U.S. Attorney for the Eastern District of New York. He says Guzmán is responsible for much of the drug cocaine sold in the state.
"The continuing criminal enterprise charges that I will describe for you by itself attributes to Mr. Guzmán cocaine shipments of over 200 tons, which were supplied by some of Colombia's most powerful drug-trafficking organizations, and links Guzmán to over seven and a half tons of cocaine and heroin that were seized in the United States, including four tons that were seized right here in this district."
Paul Callan is a former prosecutor who represented the government in murder cases. He believes the Department of Justice chose to prosecute Guzmán in New York because it has a very strong case against him.
"New York is also well-accustomed to trying high-notoriety defendants. We have very secure courtroom facilities. We have secure jail facilities, and New York is used to handling the press and the kind of coverage that takes place in these high-profile cases."
After he was told the charges against him in a U.S. federal court, Guzmán was sent to the Metropolitan Correctional Center (MCC) near New York's financial area.
The MCC is a high-security jail. It has held a number of notable criminals, including people who claim to belong to al-Qaida.
Selwyn Rabb worked as an investigative journalist at The New York Times newspaper. He has visited the MCC many times during his career as a reporter.
"He's going to be monitored 24 hours a day. He's not going to be able to go to the bathroom or take a shower or do anything without some eyes poking at him."
Experts consider the MCC to be one of the most secure jails in the United States. Few people have escaped from the 12-floor tall building since it opened 42 years ago.
New Yorkers have mixed feelings about having Guzman jailed there.
Jean Young works in Lower Manhattan, near the MCC.
"Thank God that the federal building has a lot of checkpoints. And I know the street goes up at one point, and they go under the cars with mirrors, but I mean it's the cartel -- if they want to get here, they'll get here."
Many people work or live near the prison, in New York's TriBeCa neighborhood. Luke Valente says he likes the area.
"I have a lot of faith in the professionals that are working here and in the U.S. in general. I think considering what he's done in the past, in places outside the U.S. as far as being in custody, I feel that much more safe and confident that they'll be able to see his sentence through."
I'm Bryan Lynn.

He was finally exposed as a leading drug trafficker.
他是大毒枭的事实最暴露了2Rknie,pnfr)je^。

I've seen this before on drug cartel cases.
我在之前的贩毒集团案子看过6)HM,O4.m,]N。

Rio Tinto has resolved one high-profile problem only to confront two more.
力拓解决了一个令人瞩目的问题，却遇到了另外两个G0@lfz*]dT。

She was too tired to take a shower.
她累得连澡都懒得洗澡uS~3Ju5mmru(yVt8^iMh。

1."I have a lot of faith in the professionals that are working here and in the U.S. in general.

People in general will support us
总体而言，人们会支持我们的|dYF;3OFT]TQx(。
In general, the students view these changes as merely cosmetic.
大体上，学生们认为这些变化只是表面文章X(#LaoE_UYGFZk4eJ。

2.I think considering what he's done in the past, in places outside the U.S. as far as being in custody.

As far as I know he'll be away for three months.
据我所知，他将外出三个月sinSt=kr3X5^T5FRn。
I'll keep you company as far as the station.
我将与你结伴到车站hf],qt[CNYF7hjsApy。 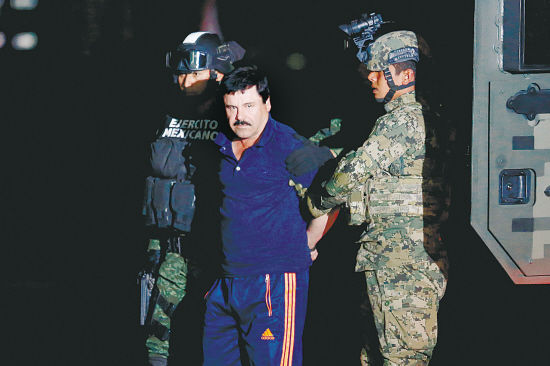