Women's March on Washington Draws its Own Protests
This is What's Trending Today:
On January 20, hundreds of thousands of Americans will gather on the National Mall in Washington, D.C., to watch Donald Trump be sworn in as the 45th president.
The next day, hundreds of thousands of protesters are also expected to gather on the National Mall. The biggest protest group will be the Women's March on Washington. About 200,000 people are expected to participate.
The idea for the women's march began on Facebook. Several women around the country who were upset about the presidential election results started Facebook pages, and called for action.
One of those women was Teresa Shook. She is a retired lawyer who lives in Hawaii. Upset by the results of the election, she decided to create a Facebook page for people who also were not happy with the results. When she woke up the next day, more than 10,000 people had joined the page. Many voiced concerns, among other things, about comments President-elect Trump had made about women.
Bob Bland is a fashion designer in Brooklyn, New York. She was also upset by the results of the presidential election. She, too, created a similar page on Facebook. And, she joined together with Shook's efforts.
Together, they and other women called for a march in Washington, D.C. The march would take place on January 21, Trump's first full day as president.
The original name for the movement was "Million Women March." But, organizers changed the name because "Million Women March" had been used by a protest group in 1997.
The movement became known as the "Women's March on Washington." The event's website says the march's aim is to "send a bold message to our new administration on their first day in office, and to the world that women's rights are human rights."
The movement has received criticism on social media. On Thursday, the hashtag Rename Million Women March trended on Twitter in the United States. People suggested new names for the protest. Some suggestions mocked the protesters for not being able to accept the results of the election.
Others criticized the movement for not being inclusive. Women who oppose abortion, for example, have not felt welcome to join.
However, others noted that the trending hashtag and comments about the movement are good reasons why a women's march is needed.
The women's march is just one of several groups that plan to protest in Washington on Friday and Saturday. Protest groups had to apply for permits from the National Park Service if they planned to gather at sites it maintains. These sites include the National Mall and other famous places in Washington.
More than 30 groups applied for permits, the Associated Press reported earlier this month.
People will also be joining the women's march online. Sonya Huber organized an online Disability March. She asked that people who could not participate in person send in a photo and explain why they wished to protest.
Washington officials have received 1,800 requests for permits to park buses near the National Mall on Saturday, January 21. They received about 200 bus permits for Inauguration Day itself.
I'm Jill Robbins.

He has to apply for a permit and we have to find him a job.
他得申请一个许可证，而我们得给他找份工作lKLrC|,z.O。

It was the first time she had seen him in person.
这是她第一次见到他本人=~15QfvoS82Nkh。

She is known as a great beauty.
她是出了名的大美女i7X6-4ZMAmOW=JD]q#w。

We have all witnessed the power of social media.
我们见证了社交媒体的实力SNo=E*]Ro2h。

1. On January 20, hundreds of thousands of Americans will gather on the National Mall in Washington, D.C.

hundreds of thousands of 几十万；无数的

2.The event's website says the march's aim is to "send a bold message to our new administration on their first day in office.

They are hoping that once in office he can be persuaded to moderate his views.
他们希望等他一上台，可以说服他观点别那么激进)j)6Y3DZQW。
During his six years in office, Seidman has often locked horns with lawmakers.
在任的6年中，塞德曼经常和立法议员争得不可开交7DHsuhAV(UIO6。 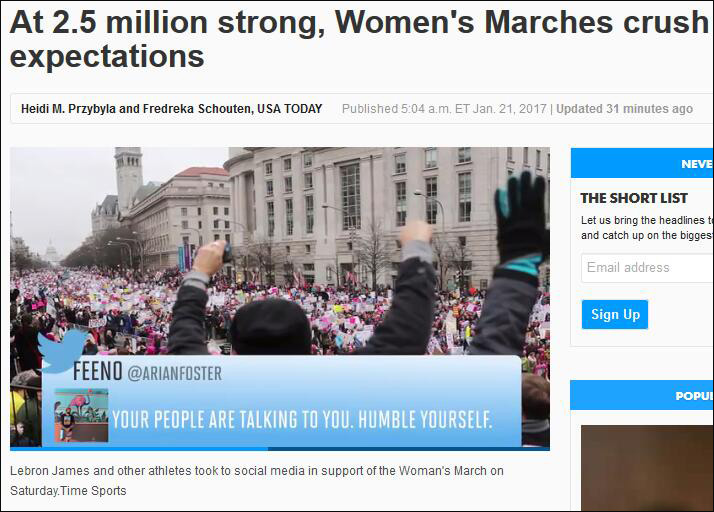