President Trump Moves to Change Obama Policies on First Day
On the first day of his presidency, Donald Trump began making changes to the policies of earlier presidents.
A document released by the new Trump White House said the president would soon withdraw from the 12-nation Trans-Pacific Partnership trade agreement. The free trade deal was negotiated by the Obama administration.
The White House website said Trump would also work to renegotiate the North American Free Trade Agreement known as NAFTA.
"If our partners refuse a renegotiation that gives American workers a fair deal, then the President will give notice of the United States' intent to withdraw from NAFTA," a White House statement said.
Neither action was a surprise. During the presidential campaign, Trump said bad trade deals had hurt employment in America.
The NAFTA agreement removed most tariffs on products traded between the U.S., Canada and Mexico. It was signed by President Bill Clinton in 1993.
The Trump administration also said it is ready to cancel what it called, "harmful and unnecessary policies." Among them is the Obama administration's plan to reduce pollutants from coal-powered electricity plants. The climate plan was designed to cut gases that cause global warming.
Another is a clean water rule to protect small waterways and wetlands from development by the Environmental Protection Agency.
More changes will be announced in coming days, the website said.
Trump has said he wants to cancel and replace a national health care law, known as "Obamacare."
His cabinet nominees have promised other major changes during Senate confirmation hearings.
In education, for example, there are plans to give parents more choice in selecting schools for their children, including private, religious schools.
And there has been discussion of permitting more drilling, mining and logging on federal lands.
"There is a great deal of reform coming to Washington," said Sean Spicer, the chief spokesman for President Trump on Thursday.
After the inauguration, Trump signed papers formally nominating the people he wants to form his Cabinet. He did so surrounded by congressional leaders from both parties at the Capitol.
The nominations are now before the U.S. Senate, which must approve nominees before they can take their new jobs.
Trump also signed a proclamation declaring a National Day of Patriotism and a bill that would permit retired Marine General James Mattis to run the U.S. Defense Department.
Late Friday, the Senate voted to approve Mattis as Defense Secretary.
In his inaugural speech, Trump said he would carry out his promise to make government focus on America's needs ahead of any others.
"From this day forward, a new vision will govern our land," Trump said. "From this moment on, it's going to be America first. Every decision on trade, on taxes, on immigration, on foreign affairs, will be made to benefit American workers and American families."
Trump, a Republican, won the presidential election after a very difficult campaign against Democrat Hillary Clinton. He promised to change many of the policies put forward over the last eight years by Democratic President Obama.
However, in his inauguration speech, Trump, the 45th U.S. president, thanked Obama and his wife, Michelle. Trump said, "They have been magnificent" in helping him prepare to take over as president.
"It couldn't have been easy for either man to be civil to the other after the election," said Larry Sabato, director of the Center for Politics at the University of Virginia. "But they were and continued to be, for the most part, to their substantial credit."
Sabato said the United States "is still deeply divided, much more so than usual."
"Yet imagine how much worse it could have been had No. 44 and No. 45 feuded day after day," Sabato said.
I'm Mario Ritter.

Duties and taxes are the most obvious barrier to free trade.
关税和税收是自由贸易的最大壁垒f)0e2!|~OLQX。

He'd been careful to be civil to everyone.
他一直谨慎小心，力求对每一个人都彬彬有礼uq^kD^Rqia,;e8=lp!a@。

It was his responsibility for foreign affairs that gained him international prestige.
他在负责处理外交事务的过程中赢得了国际声望xT)QS!;a9t,HwGZ。

They put forward some new ideas on the subject.
他们对这个问题提出了一些新的见解xBW1JHR]L.UpemD。

1. Trump said, "They have been magnificent" in helping him prepare to take over as president.

The Belgians took over Rwanda under a League of Nations mandate.
比利时人依照国际联盟的授权接管了卢旺达QlZL*p-g%Xy。
His widow has taken over the running of his empire, including six London theatres.
他的遗孀已接手管理他创下的帝国，其中包括6家伦敦剧院oe%rz,_M*F*KP[%C。

2.But they were and continued to be, for the most part, to their substantial credit."

for the most part 多数情况下 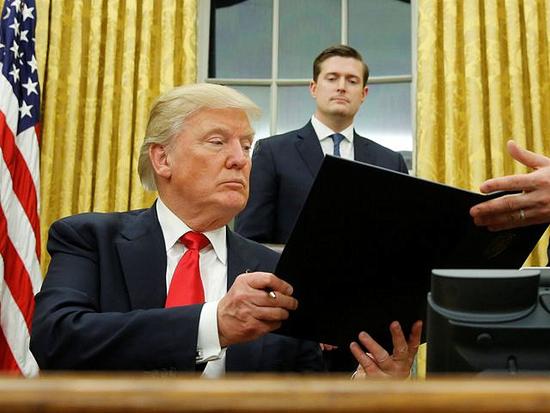