Theresa May Says Britain Will Leave the Single Market
British Prime Minister Theresa May says Britain will leave the European Union's single market.
May spoke to government employees and diplomats at Lancaster House in London on Tuesday. She had been under pressure to provide a plan following Britain's vote last June to leave the European Union.
May also said Britain will break with the European Court of Justice. She said the U.K. must regain control of its laws and borders, and will seek a new trade agreement with the E.U.
May said that the final plan would be presented to parliament for a vote.
Good news for the pound
The speech appeared to lend support to the British pound, which has fallen around 19 percent against the U.S. dollar since the vote. Shortly after May described her vision of free trade and strong economic ties, the pound rose in value.
Leaving the single market
The E.U. single market makes it easy for EU nations to trade with one another. It permits free movement of goods, workers, and services around the E.U. without tariffs. Some non-E.U. countries, such as Norway, have made agreements with the E.U. that permit them to be part of the single market if they meet conditions.
The possibility of losing access to the single market has worried many people in Britain's large financial services industry.
In her speech, May said she wants to create a new relationship with the E.U. based on free trade.
"This agreement should allow for the freest possible trade in goods and services between Britain and the E.U.'s member states. It should give British companies the maximum freedom to trade with and operate within European markets, and let European businesses do the same in Britain," May said.
The E.U. has created separate customs union agreements with countries that vary in their rules and what goods are covered.
New immigration rules
May also spoke about immigration: "The message from the public before and during the referendum campaign was clear: Brexit must mean control of the number of people who come to Britain from Europe. And that is what we will deliver."
The exact model for such control has not yet been confirmed. The British government has said that all possibilities are being considered.
However, May tried to calm fears that the Brexit will mean a more inward-looking Britain. She said she wants the country to be "stronger, fairer, more united and more outward-looking than ever before."
I'm Phil Dierking.

You must make a clean break with him.
你必须和他划清界限CM&pO*8,N(p3|t*a_H4g。

This had been a disastrous week for Prime Minister Major.
这对于梅杰首相来说是灾难性的一周lF1--+LK~9C3j).。

We want to be part of a single market in financial services.
我们希望在金融服务领域成为单一市场的一部分UzspB1!F@hV~-|)-GFWO。

China and the United States concluded entered into a bilateral trade agreement after long negotiations.
中美两国通过长期谈判后订立了一项双边贸易协定nKEShnS@4^5uOb!N。

1.In her speech, May said she wants to create a new relationship with the E.U. based on free trade.

Duties and taxes are the most obvious barrier to free trade.
关税和税收是自由贸易的最大壁垒lb|hQN8IZamDcn。
I support your advocacy of free trade.
我支持你自由贸易的主张CRMU=cvteP~~l^[.Xd0。

2.The possibility of losing access to the single market has worried many people in Britain's large financial services industry.

They now have access to the mass markets of Japan and the UK.
他们现在进入了日本和英国的大众市场AvsCON4.l,ecd=。
He has a security clearance that allows him access to classified information
他获得了安全许可，可以接触机密信息DSg2!8ba]Dll|d5++6。 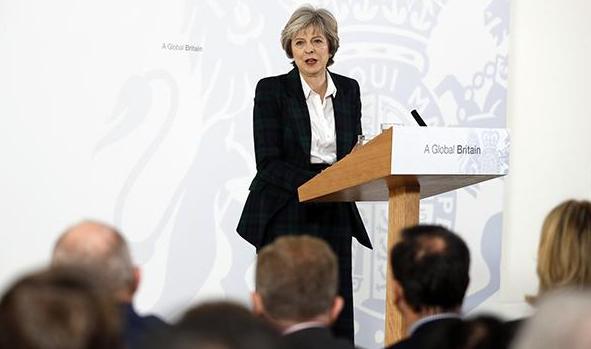