In Emotional Goodbye, Obama Awards Biden America’s Highest Honor
U.S. Vice President Joe Biden has been awarded the Presidential Medal of Freedom – America's highest civilian honor.
U.S. President Barack Obama surprised Biden with the award Thursday during an emotional ceremony at the White House.
Obama announced the award after praising Biden for his years of service, calling him "the finest vice president we have ever seen."
Biden appeared shocked at the announcement, which he said Obama and others inside the White House had kept secret. After hearing the award was about to be presented, Biden briefly turned away from the cameras to clear some tears.
The Presidential Medal of Freedom is America's highest award for civilians. Obama has awarded the medal to others during his presidency. But he explained that Biden's award carried an additional level of distinction that he has never given out before.
Obama said this highest-level award was only given to three individuals by the three presidents that served before him. Those individuals were Pope John Paul II, former President Ronald Reagan and former Secretary of State Colin Powell.
In his tribute to Biden, Obama said that from the very start, he never regretted choosing him as his right-hand man.
"He was the best possible choice, not just for me, but for the American people."
Obama said Biden's advice on many issues had made him a better president. He called the vice president "a lion of American history."
"To know Joe Biden is to know love without pretense, service without self-regard and to live life fully."
Both men said that during Obama's eight-year term, the two had developed a relationship that went far beyond their work. Many extended members of the Obama and Biden families also became close personal friends.
After Obama placed the medal around his neck, Biden thanked him and then reflected on his term as vice president.
He said he greatly valued being trusted by Obama in "every single thing you've asked me to do." He said he always found it easy working for and with Obama, for whom he said he had the highest level of respect.
"I've never known a president - and few people I've ever met - who have had the integrity and the decency and the sense of other people's needs like you do."
Biden said he hopes to always be able to look back and say, "I was part of the journey of a remarkable man who did remarkable things for this country."
He noted that even though he felt he may not deserve the medal, he knew "it came from the President's heart."
"Mr. President, you know as long as there's a breath in me, I'll be there for you, my whole family will be. And I know, I know it is reciprocal."
Obama gave his farewell speech as president on Tuesday in his hometown of Chicago. He will leave the White House on January 20, when President-elect Donald Trump is sworn in.
I'm Bryan Lynn.

She was sworn in as head of an interim government in March.
她3月份宣誓就任过渡政府首脑S~E^]3wduiZ)。

His farewell speech marked his exit from politics.
他的告别演说是他退出政界的标志Vp-L5+npxD。

You can phone me at work as long as you don't make a habit of it.
你可以上班时给我打电话，只要别一来二去打上瘾了就成s9y)e5jgFD23F3O=G4z&。

Looking back, I am staggered how easily it was all arranged.
回头一想，我惊异地发现这一切的安排竟是如此简单fol,]PnA4fdT。

1.Biden appeared shocked at the announcement, which he said Obama and others inside the White House had kept secret.

They had given an absolute assurance that it would be kept secret.
他们信誓旦旦地保证将对此绝对保密UXZ1N6r+ohs#。
The exact locations are being kept secret for reasons of security.
确切地点因为安全原因要保密q-^]lx|@=X。

2.In his tribute to Biden, Obama said that from the very start, he never regretted choosing him as his right-hand man. 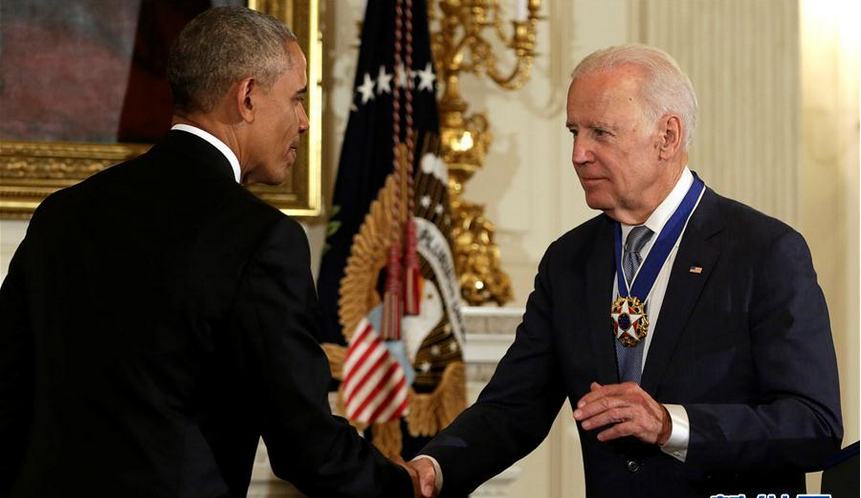