Michelle Obama Surprises Supporters on 'Tonight Show'
This is What's Trending Today.
Barack and Michelle Obama are saying their goodbyes as their time in the White House comes to an end.
The President and First Lady have been making their final speeches and television appearances.
Michelle Obama recently did a farewell interview with television host Oprah Winfrey. Barack Obama gave his farewell speech to the American people in Chicago on Tuesday night.
And on Wednesday, Michelle Obama had some fun with late night television host Jimmy Fallon on "The Tonight Show."
One part of the show the first lady took part in is called "Thank-You Notes." It is a popular segment. In it, Fallon usually writes humorous "Thank-You Notes" to celebrities, people in the news or strange things he notices about life.
For example, he once wrote a thank-you note to the word moist "for being the worst word, ever."
Fallon and Obama took turns writing messages. Fallon wrote "Thank you, First Lady Michelle Obama, for bringing a whole new meaning to the phrase ‘the right to bear arms.'"
Obama is known for showing off her strong arms by wearing sleeveless dresses.
But in a more serious segment, the show's producers asked regular people to describe what Michelle Obama means to them.
The people looked at a painting of the first lady as they spoke. One woman said, "because of you, I know that my race does not define who I am, or what I can accomplish."
Another person said, "Thank you for making me a more confident woman."
One man said Michelle Obama reminded him of the best teachers he ever had.
Another man thanked Obama for inspiring his young daughter to eat more vegetables, and for always encouraging kindness.
After each person finished speaking, they got a huge surprise. Michelle Obama herself stepped out from behind a curtain. She hugged them and thanked them for their kind words.
The participants were surprised and emotional. Some even cried on the first lady's shoulder.
One woman exclaimed, "This is not what I was expecting. I was eating pizza bites yesterday in my bed and now I'm meeting the first lady!"
Another participant turned out to be a former classmate of Obama's. The two attended Princeton University together.
The video came out on Facebook and YouTube early Thursday morning. It has already been played over 11 million times.
Viewers described the video as "an amazing segment," "really heart-warming."
Some wrote that they watched with tears rolling down their cheeks.
And that's What's Trending Today.
I'm Dan Friedell.

The boy's ball was rolling down the hill.
这个男孩子的球正向山下滚去.fffJ&[sO[pNC。

It turned out she was shacked up with a lawyer in New York.
原来她在纽约和一名律师同居了EK^+UMAd)Rx[YpJw。

I don't regret stepping out of the security of marriage.
我并不后悔放弃了婚姻所带来的安全感=KX-CvD(Ij[qO。

1.One part of the show the first lady took part in is called "Thank-You Notes."

Three-quarters of the country's workers took part in the strike
该国有3/4的工人参加了这次罢工A%Z+OZMe1NE。
She took part in a BBC radio phone-in programme.
她参加了英国广播公司听众来电参与节目qR5VM~2v9Fbzs。

We took turns to drive the car
我们轮流开车Ihy_rqw3ex^jo#aS(。
We took turns stoking the furnaces.
我们轮番给锅炉添煤)1.IWwJKb!。 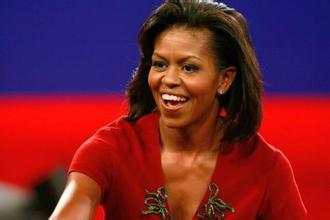