Chicago Working to Reduce Gun Violence
Gun violence is an issue in Chicago, Illinois, America's third largest city.
The Chicago Tribune reported that 61 people were shot in the city during the long Christmas holiday weekend. Eleven of those shot died, the newspaper said. The holiday weekend ended Monday night.
The Tribune said the attacks brought the total number of shootings for 2016 to more than 4,300. The number killed in shootings this year reached 770, it said.
In 2015, 2,989 people were shot and 492 were killed in gun violence.
Chicago is not the only city in the United States to report an increase in shootings and murders.
The Brennan Center for Justice is a non-profit research group with ties to New York University's Law School. It reported last week that the murder rate for 2016 in America's 30 largest cities is expected to be 14 percent higher than the rate last year.
The center blames the increase on fewer police officers working in some cities, as well as poverty and increased gang violence. But it said that two large cities -- Baltimore and Washington D.C. -- have fewer murders this year than in 2015.
Eddie Johnson is Chicago's Police Superintendent. He said 90 percent of those killed in his city over Christmas weekend had ties to gangs, criminal histories or had been identified as potential offenders or victims.
Johnson urged politicians to increase sentences for people found guilty of gun crimes.
"If you pick up a gun and shoot somebody, you should go to prison, period, that's the end of the story," he said.
"Some people want to give them a pass for it. I don't," he added.
Chicago is working to add police officers who more closely represent the ethnicity and races of city residents.
Rahm Emanuel is mayor of Chicago. He said, "Officers come together from different backgrounds, different cultures, and different faiths for a common cause: to serve and protect the people of the City of Chicago. And this whole city will be behind our officers, rooting for their success."
Gary Slutkin is founder of a group called Cure Violence. His group has trained people to work in their communities to persuade people to choose non-violent ways of dealing with conflicts.
Slutkin said the workers often knew when a young person was planning a violent act just by living nearby. Because they have credibility with their neighbors, they often have more influence than police, or even parents, he said.
Often the "issue" with another young person was not that big a deal -- maybe someone spoke to his girlfriend or owes him money. His workers, Slutkin said, could persuade young people that their problem with another person was not worth a violent response.
"Sometimes it is simply pointing out that if you go ahead and do it (shoot somebody), people are going to be looking for pay back against you or you might be spending 20 years or more in prison," Slutkin said.
But he said a loss of government assistance has left all but one city neighborhood without the program this year. He believes the lost funding and higher shooting rates are related.
Slutkin is a professor of epidemiology at the University of Illinois' School of Public Health. He said his program uses policies developed by health experts to deal with disease. It works, he said, because violence can spread just like diseases such as AIDS or tuberculosis.
His Cure Violence Program operates in 25 U.S. cities, as well as in other countries, such as South Africa, Honduras, Mexico, and prisons in Britain.
I'm Ashley Thompson.

The Empire State Building shooting: how can we respond to gun violence?
帝国大厦枪击事件我们应如何应对枪支暴力？

Crews are working to plug a major oil leak.
船员正在封堵一个漏油的大洞GEgSptH@a|5bSqFC。

She saw a psychiatrist who used hypnotism to help her deal with her fear.
她去看了一位用催眠术帮她克服恐惧感的精神科医生C6hOBUTz7MJ;)a。

They visited some factories, hospitals as well as the school.
他们参观了这所学校，还参观了工厂和医院LyjW3#(X8eRS,y.9mI。

1.people are going to be looking for pay back against you or you might be spending 20 years or more in prison

2."If you pick up a gun and shoot somebody, you should go to prison, period, that's the end of the story," he said. 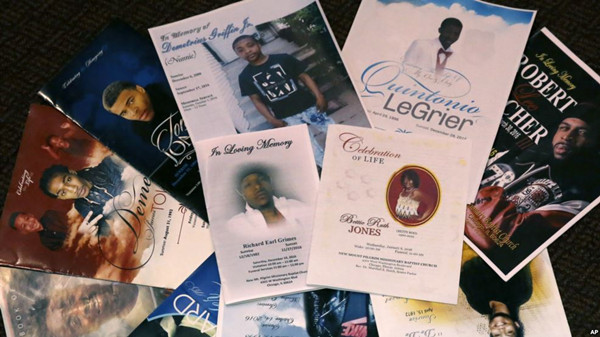