Young Boy Rescues Brother Trapped Under Furniture
This is What's Trending Today:
On one recent morning in the American state of Utah, 2-year-old twin boys Bowdy and Brock were playing in their bedroom.
The boys were climbing on a piece of furniture called a dresser. They were trying to get into some empty drawers and climb to the top of the dresser.
But as they both tried to climb up, the large dresser fell down on top of them.
The accident was recorded on a camera the boys' parents put in the bedroom. Some parents use these kinds of cameras to watch their children playing in another room.
One of the young boys, Bowdy, managed to escape from under the dresser. But his brother, Brock, remained stuck under it.
The video shows Bowdy walking around the dresser trying to find a way to free his brother. Almost two minutes pass. But Bowdy cannot move the dresser.
Eventually, though, Bowdy found a way to push the dresser toward the wall. His brother was then able to roll out from underneath the big piece of furniture.
Both boys are okay. They were not hurt.
Their parents decided to put a video of the incident on YouTube. They hoped it would be a warning to other parents around the world.
In just three days, the video has been viewed over 7 million times. It is the top trending video on YouTube.
Ricky Shoff is the father of the boys.
He posted the video to his Facebook page on January 1. He wrote: "I've been a little hesitant to post this. But I feel it's not only to bring awareness, but it is also incredible."
Shoff also told his friends to share the video and to make sure their furniture was secure. For example, big pieces of furniture should be safely attached to a wall or to the floor.
Kayli Shoff, the boys' mother, said when she first saw the video, she "felt like the worst mom."
But the parents said they made the video public even though they knew they would be criticized for not paying enough attention to their children.
This is not the first time falling furniture has made the news in recent months.
In December, furniture-maker Ikea agreed to pay $50 million to the families of three American boys, in three different states, killed by falling dressers.
The company is recalling its furniture. It is also offering customers a refund or free tools to attach the furniture to a wall.
And that's What's Trending Today.
I'm Jill Robbins.

I picked up a piece of wood and started carving.
我拿起一块木头，开始雕刻起来JJch|aF*xFVVr)。

I was working hard to get into Cambridge.
我为能上剑桥大学而刻苦学习]+C(Akp]Wu8hl。

Watching him climb up the precipice, everybody was breathless with anxiety.
看着他往悬崖上爬，大家都捏一把汗MhqL6m~7]Dgi9S[I。

The old lady fell down in adoration before Buddhist images.
那老太太在佛像面前顶礼膜拜v+&1^VKJd+u[zh,RuEBC。

1.The video shows Bowdy walking around the dresser trying to find a way to free his brother.

We must find a way to resolve these problems before it's too late
我们必须及时找到解决这些问题的方法x([7!kMxri^=|(。
He thinks he can find a way to vaccinate the elephants from a safe distance.
他认为自己能找到一种从安全距离给大象接种疫苗的方法url3ULF)0Bpsr;f1|)。

2.His brother was then able to roll out from underneath the big piece of furniture.

We'll give her some VIP treatment and roll out the red carpet
我们将给予她贵宾级礼遇，并且为她铺设红地毯o;~7z*GaNlMBR。
Churchill's cadences began to roll out of the shortwave radio.
短波电台里开始传出丘吉尔那抑扬顿挫的声调[5^C_rS~@G9。 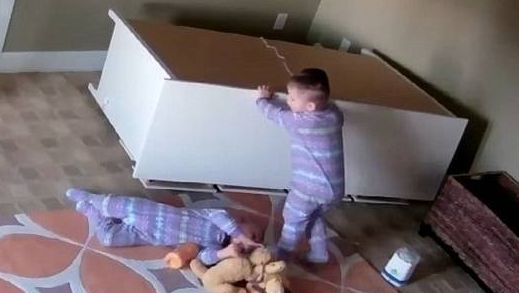