China and Nepal to Hold First Joint Military Exercises
China and Nepal are preparing to hold their first-ever joint military exercises, officials from both countries confirmed.
A spokesman for China's Defense Ministry said last week the two nations had agreed during talks to hold joint military drills. He did not provide details, adding that more information would be released later.
The spokesman said the militaries of China and Nepal have cooperated with, in his words, "mutual respect" over a period of time. He added that the past cooperation led to the planning of the first joint military exercises.
A Nepal army spokesman said Chinese troops would train Nepali forces in ways to deal with hostage situations involving terrorist groups. Training in managing natural disasters will also take place, the official said.
India has held military drills with Nepal for years.
Experts say the joint military cooperation between China and Nepal is a sign of strengthening ties between the two countries. In recent years, Beijing has provided Nepal with millions of dollars to help build roads, hospitals and other infrastructure. China has also signed agreements to supply energy to remote mountain areas.
India to watch closely
One China expert in New Delhi, Jayadeva Ranade, told VOA that Indian officials will be carefully watching the new exercises. He questioned whether the military relationship was going to expand or remain a one-time event.
Ranade also said that India considers Nepal part of its "strategic space." Any increased Chinese presence in Nepal "brings China right up to (India's) border, which is very porous," he noted.
Nepal's ambassador to India, Deep Upadhyay, said India should not be worried about the exercises affecting relations with Nepal.
He told the Times of India newspaper the drills will be small and will likely not have any long-term implications.
"There's really not much in it. Whichever way you look at it, Nepal has a special relationship with India and that's not going to change because of any such exercise," he said.
I'm Bryan Lynn.

Soldiers are supposed to follow the instruction manual during military exercises.
士兵在军事演习时必须按教令行动2L+up2VA!.w。

The British cooperated with the French in designing the satellite.
英国人和法国人合作设计了那颗卫星NZu_%Z65&8J*。

Businesses will have to aim at long-term growth.
企业必须以长期增长为目标~phKM_K_.JE。

We stand for equality and mutual respect between countries.
我们坚持国与国之间的平等和相互尊重9gM)J)z~Fm3。

1.The spokesman said the militaries of China and Nepal have cooperated with, in his words, "mutual respect" over a period of time.

a period of time 一段时间

She spent a period of time working with people dying of cancer
她有一段时间曾帮助垂危的癌症患者2b~iLz4K!*。
After a period of time, we have learned a lot.
过了一段时间，我们已经学了很多了l]TDzJNZD|vNS88t2tW。 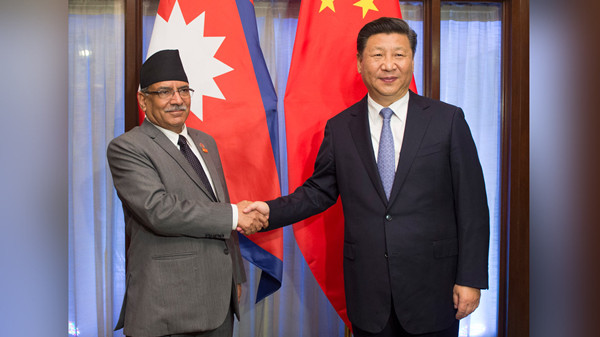