Actress Debbie Reynolds Dies, One Day After Daughter Carrie Fisher
This is What's Trending Today.
Many people have been reacting to the news of Carrie Fisher's death on Tuesday. Fisher died at the age of 60. She was best known for acting in the Star Wars movies in which she played Princess Leia.
Then, Fisher's mother, actress Debbie Reynolds died because of complications from a stroke.
Reynolds was 84. She was a star actress and singer starting in the 1950s.
Her son, and Fisher's brother, Todd, confirmed the news to reporters late Wednesday.
Reynolds won her first big part at the age of 19 in the 1952 film "Singin' in the Rain."
She acted and danced with Gene Kelly, who was one of the most popular performers of that time.
She made news in 1955 when she married singer Eddie Fisher. They had two children, Carrie and Todd.
Three years later, Fisher left Reynolds and married actress Elizabeth Taylor. It was the sensational Hollywood love triangle of the time.
Reynolds was nominated for an Academy Award, known as an Oscar, for her part in the 1964 film "The Unsinkable Molly Brown."
After the 1960s, Reynolds had fewer film roles, but still appeared often on television.
Many people used social media to express their sadness upon hearing the news.
They could not believe Reynolds died one day after her daughter.
There is a Twitter account for Fisher's dog, Gary. It is run by a fan. The person tweeted a picture of Reynolds and Fisher, writing "they don't make ‘em like this anymore."
Comedian and talk show host Ellen DeGeneres wrote: "I can't imagine what Carrie Fisher and Debbie Reynolds' family are going through this week. I send all of my love."
Actor William Shatner is best known for his role as Captain Kirk in the Star Trek series. He wrote: "Debbie Reynolds was one of the last of Hollywood Royalty. It breaks my heart that she is gone. I'd hoped that my grieving was done for 2016."
Other fans posted tributes to the women. Some made videos showing Reynolds' work as dancer, like this clip of Reynolds performing with Donald O'Connor in the film "I Love Melvin" from 1953.
And a French artist posted an illustration of Reynolds and Fisher holding hands, dressed in their costumes from"Singing in the Rain” and “Star Wars”.
And that's What's Trending Today.
I'm Dan Friedell.

Social media has become the focus of not only our private lives, but our careers as well.
社交媒体已不仅仅是我们私生活的一部分了，而且它已经开始影响到了我们的事业I4|2WSdO=Q%jvu。

I wrote a story about a love triangle in my creative writing class.
在我的创作性写作课上，我写了一个三角恋的故事7Oa5Z2wD(s+6M*[。

Practically every movie he made was nominated for an Oscar.
他执导的影片几乎每部都获得过奥斯卡奖提名%py^fNRP-^~@K&bYyh72。

Nothing is known as yet about what transpired at the meeting.
会上到底发生了什么现在还没人知道u0qr]ElE])x)。

1.Comedian and talk show host Ellen DeGeneres wrote: "I can't imagine what Carrie Fisher and Debbie Reynolds' family are going through this week.

She's going through a difficult time. That's all there is to it.
她正经历一个困难时期Qr*U0un=[FzuFA。就这么简单p95D.Yp**g=q,p。
We have been going through a bad time.
我们正经历一段困难时期V_8P_z-23Ny;9zE#[Z+。

2.And a French artist posted an illustration of Reynolds and Fisher holding hands, dressed in their costumes from"Singing in the Rain” and “Star Wars”. 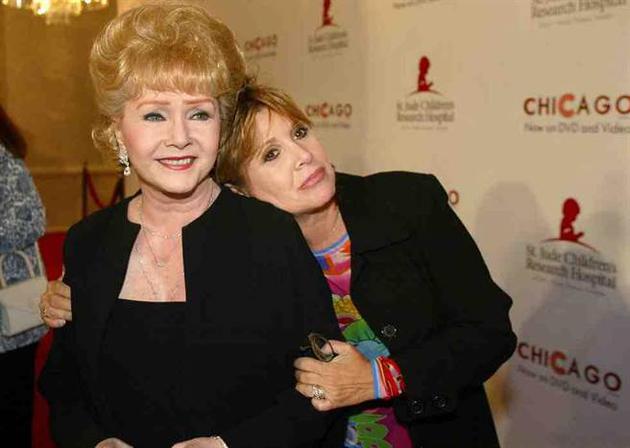