The Story Behind the Photo
This is What's Trending Today.
You may not know the name Burhan Ozbilici. But by now, you have probably seen his photos.
Ozbilici is a photographer for the Associated Press news service. And on Monday, he took pictures of the man who had just shot Russia's ambassador to Turkey, Andrei Karlov.
Karlov was attending a photo exhibition in Ankara. He later died of his wounds.
The shooter has been identified as Mevlut Mert Altintas, a 22-year-old police officer.
In one of Ozbilici's photos, the shooter is pointing a finger in the air. In his other hand, he is holding the gun by his hip. He is shouting, as Karlov's body lies on the floor near him.
Photographers and media experts are calling it "the photo of the year."
People have praised Ozbilici for remaining calm enough to keep taking photos after witnessing an assassination.
Ozbilici told the Associated Press many people dropped to the floor when the man showed his gun. Other people ran.
But he did not.
"I'm a journalist," he said. "I have to do my work. I could run away without making any photos. ... But I wouldn't have a proper answer if people later ask me: 'Why didn't you take pictures?'"
Dennis Paquin is the Associated Press' acting director of photography. He said the image shows how often photographers face real risks. Dangerous situations can come up even in quiet places like an art gallery.
Ozbilici said he only decided to attend the event at the art gallery at the last minute.
"The event seemed routine," he wrote in an Associated Press story.
After the gunshots -- "at least eight of them," Ozbilici recalled -- he found a safe space behind a wall. There, he continued taking photos.
Many people have written about Ozbilici's photos and his work.
A New York Times reporter called him courageous.
One magazine editor called him "extraordinarily brave."
On Tuesday night, Ozbilici wrote on Twitter: "Andrei Karlov, good man, rest in peace. ... Thanks God ... I'm alive."
And that's What's Trending Today.
I'm Dan Friedell.

The official China News Service said the workers were armed with axes, slingshots and rocks.
官方媒体中国新闻社称，工人们持有斧子、弹弓和石块,bS,3u.wmki1;x#[clkQ。

They lost their way in the desert and died of thirst.
他们在沙漠中迷路而渴死了z5qDU_BO2M@。

The annual photo exhibition is about to open.
摄影年展即将开展#T0bP52c*QQ^。

His pictures are on display at the art gallery.
他的绘画现陈列在美术馆中kDo1(oNHF83(。

1.The shooter has been identified as Mevlut Mert Altintas, a 22-year-old police officer.

Halsey was identified as a leading proponent of the values of progressive education.
哈尔西被认为是进步教育价值观的主要拥护者gTSnM+B|v+!%E!fVSM。
The bodies were identified as those of two suspected drug dealers.
那两具尸体被辨认出原是两名贩毒嫌疑犯]U=6,39c(UJ!yP]aLx3n。 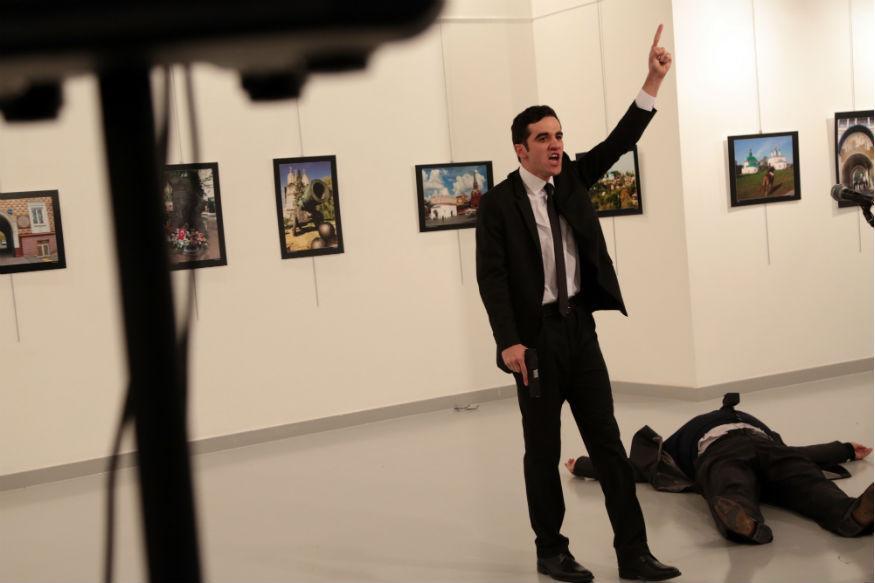