Meet Someone Special by Covering Up Your Face
Speed dating is an efficient way for single people hoping to find romance to meet a number of other single people at once.
People who attend a speed dating event go on several short dates in the same night. At the end of the night, they let the organizers know if they met someone they would like to see again.
The organizers then help the daters get in contact with each other.
The problem with this kind of event, however, is that the people with the best looking faces and bodies are often the most popular.
But one speed dating company in Japan is working to change that. It wants to prove that people can connect emotionally without seeing each other's faces clearly.
The company is called Def Anniversary. It thinks that people trying to find a partner should think more about personality than appearance.
The singles are required to wear surgical masks, which cover the lower part of the face.
Kei Matsumura is the head of Def Anniversary. She said the singles attending her events should get to know each other's personality first instead of judging a person only on his or her appearance.
One opinion survey found that nearly half of single people between the ages of 25 and 36 in Japan want to be married. They say they just have not met the right person yet.
Those questioned say there are not very many ways to meet new people outside of work.
That is why speed dating events are popular.
Chiharu Tsukahara is one speed dater. She said she was able to learn more about her possible dates because her face was covered.
"Generally, facial features influence our first impression, but here, personality matters," she said.
Yasumasa Kishi is another speed dater. He liked Def Anniversary's masked dating event.
"Because I was not being judged on my appearance, I think I was able to be more outgoing with the women," he said.
Research from Japan's health ministry said the marriage rate nationwide has dropped by 50 percent since 1975.
Maybe the masked dating will make a difference.
I'm Dan Friedell.

He suspects there's a conspiracy to cover up the crime.
他怀疑有人密谋掩盖犯罪事实-SdL2+h(u|7](d@uU*。

I had a great first impression of American people.
我对美国人民有了很好的第一印象D2YXwYt@KZ_;(K|。

Instead of snacking on crisps and chocolate, nibble on celery or carrot.
不要把薯片和巧克力当零食来吃，要吃些芹菜和胡萝卜a!ZRhexF_4~o)veic。

We have lived here quite a number of years.
我们在这儿住了好些年了oCE[F0R4mMs。
This equipment has saved the lives of a number of new born children.
这套设备已经挽救了许多新生儿的生命4+^GUDqiGj-!H。

2.Maybe the masked dating will make a difference. 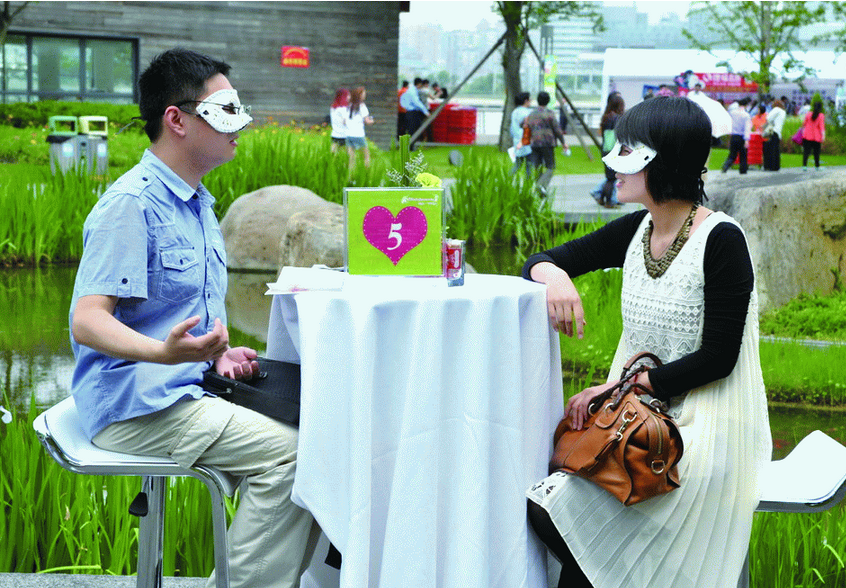