Strange Video of 'Ice Monster' Recorded in Alaska
This is What's Trending Today.
Many people have heard the story of Scotland's Loch Ness monster.
The sea creature, often called Nessie, is said to live in Loch Ness, a large waterway in the Scottish Highlands.
Yet, have you ever heard of an ice monster in the American state of Alaska?
Well, an ice monster is what many people thought they were seeing when a federal government agency published a strange-looking video. The Bureau of Land Management put the video on its Facebook page.
The pictures were taken in Fairbanks, a city in north-central Alaska. Alaska is the northernmost part of the United States. While winter has yet to officially begin, weather conditions in Fairbanks already are very cold.
In the video, a fish with ice on its back appears to be swimming in the Chena River.
The video was only 20 seconds long. But it was enough to get people wondering what they saw.
One person said he thought it showed a shark that lost its way.
Someone else wrote that he thought the video was a prank designed to trick people. The writer said the Bureau of Land Management wanted to bring attention to its Facebook page.
A number of media organizations picked up on the ice monster story and talked about it on their shows.
Other writers asked if the video was edited in some way, removing some images or adding others. Perhaps, they reasoned, the bureau was trying to frighten people around the celebration of Halloween.
Some people said the ice monster was a "zombie salmon," or a larger fish: a sturgeon.
One writer even suggested the creature was an alligator or crocodile. But such an animal could not survive in Alaska, where it does not get very hot, even in summer.
Some readers said it was ice moving in the river current, or ice that was frozen to a rope or some other object.
On October 31, the Bureau of Land Management published an update.
It agreed with some of the people who commented on the original piece.
An expert from the Department of Fish and Game told the bureau the picture looked "really cool," but it was probably just ice stuck to a rope. The ice caused the rope to float and move in the river's current.
Even though the mystery seems to be solved, some people do not seem persuaded. Others are still wishing it was a "real" monster.
And that's What's Trending Today.
I'm Dan Friedell.

The threat comes from another sea creature.
这个威胁来自于另外一种海洋生物[rX_.eY7xW。

He proposes that businesses should pay taxes to the federal government.
他提议企业应该向联邦政府纳税@[G#|vn_2E5zv。

I've got a feeling that the death may be tied up with his visit in some way.
我有种感觉，死亡似乎和他的来访有某种关联+f+FRi[8s2,。

I lost my way because it was too dark.
天太黑，我迷了路Nb57hf&G|Hy@OM+~zq)。

1.The writer said the Bureau of Land Management wanted to bring attention to its Facebook page.

2.The ice caused the rope to float and move in the river's current.

Police moved in to disperse the crowd.
警察开进来驱散人群9E|zMi.p|d&y。
Her husband had moved in with a younger woman.
她丈夫和一个比她年轻的女人同居了S4SYA*YzW-。 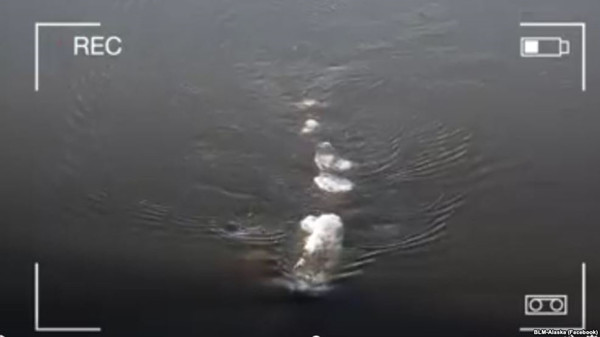