Syrian Man Brings Supplies to Children in Aleppo
Rami Adham was deeply troubled by television reports he saw about children in his former home of Aleppo, Syria.
The reports said Syrian government attacks were terrorizing the children.
He wanted to help them.
Adham now lives in Finland with his six children. He told VOA that he used money he had saved to buy toys to bring to Syria. He also gathered some of his own children's toys.
He began smuggling toys into the city in 2012. The trips were very dangerous.
The 43-year-old has traveled more than 28 times to the city he left 27 years ago. He estimates he has brought about 20,000 toys to the city.
He spent about two weeks in Aleppo in September. He brought toys donated by people throughout the world. He also brought some food and medicine.
He and other volunteers carry the goods in cloth bags on their backs. On most trips, he can bring about 80 kilograms of goods into Aleppo.
The trips to Aleppo begin with a flight from Helsinki to Turkey.
Adham then walks across the border into Syria. These crossings are illegal. Only aid workers are permitted to cross from Turkey into Syria.
He says he has faced serious threats to his life. But, people in Syria help him.
He says early this year he was trapped in a place during a bombing raid. Adham was badly wounded. Health care workers treated him at a small hospital in Aleppo. He had a broken arm and had shrapnel in his back and neck. He was later sent to Turkey for treatment.
Adham leads a non-profit group that receives toys from throughout Europe. The group also helps 400 children in Syria whose parents have died. And it operates three schools in refugee camps near Aleppo that are controlled by rebels. He says the group helps educate more than 2,000 Syrian children.
He says his group began with his friends and neighbors in Finland. It has now expanded to other cities in Finland and to other countries.
He says the Syrian civil war has killed, wounded or displaced hundreds of thousands of children.
Justin Forsyth is an official of UNICEF, the United Nations Children's Fund. He recently described the children of Aleppo as "trapped in a living nightmare. There are no words left to describe the suffering they are experiencing," he said.
Recently, the top UN official trying to end the civil war warned that rebel-held eastern Aleppo could be destroyed by the end of the year.
Staffan de Mistura said if Syrian and Russian airstrikes on the city continue, "thousands of Syrian civilians, not terrorists, will be killed and many of them wounded."
Experts estimate there are as many as 100,000 children among the 250,000 people trapped in rebel-held areas of Aleppo.
I'm John Russell.

The trip will bring to an end years of estrangement between the two countries.
此行将会结束两国多年来的疏远关系v,7J_&~z(r[^hcv*y6)。

The blue cloth bag was now faded and yellowed with wear.
经过日晒雨淋，蓝布口袋已经褪色，发黄了@M|j)A6k~8^+[。

She was yelling and screaming and carrying on.
她又喊又叫，嘴里说个不停SK+N_VCB(rnS。

First of all, could I begin with an apology for a mistake I made last week?
首先，请允许我为上周犯下的错误道歉ODO!*RFZwm!。

1.Adham then walks across the border into Syria.

If the street is busy, don't walk across.
如果马路拥挤，不要横穿Es(qJLcW1bwg5toa。
They had to walk across an emergency footbridge, holding onto a rope that served as a rail.
他们必须握着一条绳索充当扶手穿过一条紧急人行天桥dUFO[=&x6|hU-GB2。

2.And it operates three schools in refugee camps near Aleppo that are controlled by rebels.

They say they will stay to rebuild their homes rather than retreat to refugee camps.
他们说他们将留下重建家园而不是躲到难民营里oh.4h-7eNPY;。
They stay here a few hours before being sent to refugee camps, which are now almost full.
他们在这儿呆了几个小时后被送往难民营，而那里现在几乎已经满员了r=;0ewjH)!-KYf#1+。 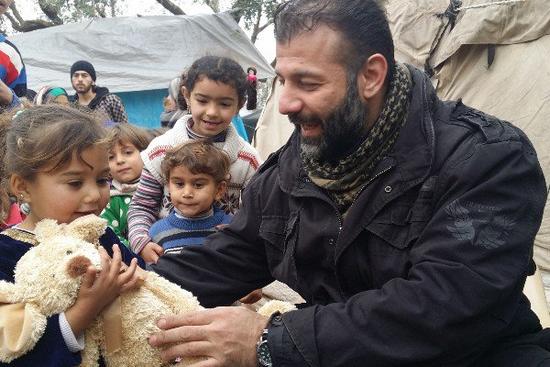