21 Kidnapped Chibok Girls Released in Nigeria
Twenty-one schoolgirls kidnapped by the Boko Haram militant group were freed this week after being held for more than two years.
The 21 were part of a group of nearly 300 girls taken by Boko Haram in April 2014 from the town of Chibok in northern Nigeria.
The release was negotiated between the Nigerian government and Boko Haram. The deal was facilitated by the International Committee of the Red Cross and the Swiss government.
The 21 girls were taken to the capital, where they met Thursday with Nigerian Vice President Yemi Osinbajo. He called the release "very exciting news" for the whole country.
Names of all the girls were to be released as soon as their families were contacted. Health information about the girls was not made public. However, at least one of the girls is reportedly pregnant.
The country's Information Minister, Alhaji Lai Mohammed, said the girls were freed after "painstaking negotiations and trust on both sides."
Nigerian officials said they planned to hold more talks with Boko Haram about the release of more captured girls.
Dozens of the kidnapped girls have been able to escape. The 21 released this week were the first to be rescued as a result of government action.
Boko Haram has led attacks on schools as part of its insurgency. The extremist group has been fighting for seven years to establish an Islamic government in northern Nigeria.
Boko Haram is blamed for the deaths of at least 20,000 people since 2009. More than 2.7 million people have also been displaced in the fighting.
Nigerian President Muhammadu Buhari has repeatedly promised to rescue the kidnapped girls and crush Boko Haram.
Last week, Nigeria's military carried out a number of airstrikes against the group. The offensive took place in the Sambisa forest, a stronghold of Boko Haram, which last year pledged its loyalty to Islamic State.
I'm Bryan Lynn.

The militant group claimed to have killed two soldiers.
这个激进团体声称已经杀死两名士兵+~i&Gd1L_YzLM。

I regard the generation and use of health information as the most urgent need.
我认为产生和使用卫生信息是最为紧迫的工作.uuqnI]pL[ho=。

Forensic experts carried out a painstaking search of the debris.
法医专家对残骸进行了极其仔细的搜索#W7uNs,rwM;r9。

The British government threatened to make public its disquiet but then pulled back.
英国政府威胁要将其担忧公之于众，但后来没有这么做8mz*rfW9_U.](5y。

1.Names of all the girls were to be released as soon as their families were contacted.

As soon as we found this out, we closed the ward.
我们一发现此事就关闭了病房q]|wNRA]G13g。
As soon as I had made the final decision, I felt a lot more relaxed.
我一作出最后的决定就感到轻松多了A6yN2xp,Vbg&。

2.Last week, Nigeria's military carried out a number of airstrikes against the group.

Forensic experts carried out a painstaking search of the debris.
法医专家对残骸进行了极其仔细的搜索25q)bmIQFu。
I carried out my duties conscientiously.
我一丝不苟地履行我的职责.+jLwWd.k3。 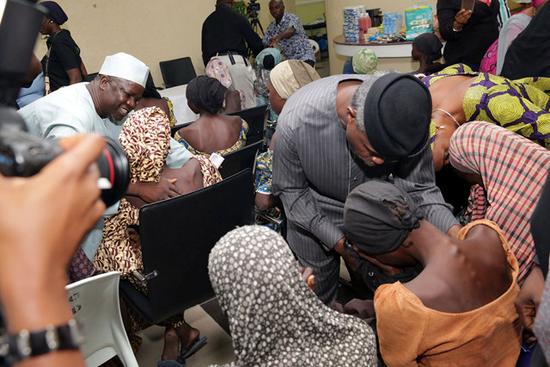