Runners Face Mud Pit at Texas Race
This is What's Trending Today.
A running website recently published a video of a high school race in the United States.
The site, FloTrack, is known for reporting on competitive running. It provides results from races around the world.
FloTrack told about Usain Bolt and his success at the Olympic Games in Rio de Janeiro. It also has reports about big races, like the Fifth Avenue Mile in New York City.
There was also a story about a recent high school cross-country race in Texas.
Cross-country is the name for an event where the runners compete on uneven ground instead of running in a circle on a flat surface. Some cross-country courses send runners around a waterway, through the woods or up and down hills.
The high school race took place in Texas. It was called the Gingerbread Jamboree. About 20 high schools sent runners to the jamboree. The course was five kilometers long.
But why would a high school event find its way onto the Facebook page of a site that reports on Olympic runners?
Because a camera set up next to a wide mud pit captured some amazing images.
The slow-motion video showed one runner taking off like a high-jumper, taking hold of his knees and then landing like a cannonball in the mud pit.
But that was not all.
Just seconds later, while other runners tried to stay clean and dry, another runner lept and dove chest-first into the water.
About 1 million people watched the video since it came out on Facebook.
One thousand people left comments on the Facebook post, which is called "Dear Cross Country ... Welcome back."
Many people said they could imagine themselves doing the cannonball jump into the mud pit. Others were impressed with the beauty of one runner who did the "belly flop," landing flat on his stomach.
And plenty of people noticed the runners who were doing their best to stay dry.
Dan Hall of California wrote "I'd be the guy trying to take long steps in hopes of only getting one foot a little wet!"
It turned out photographer Sean Pokorny was taking pictures from a different angle.
And he also photographed other runners jumping into the mud pit after the race.
And that's What's Trending Today.
I'm Dan Friedell.

Are you excited about graduating from high school?
你从高中毕业会不会感到很兴奋呢？

This town is known for its handwork.
这个城市以其手工制品闻名@bIzPr;ISi3.。

Our factory is to make arrangements for the cross-country race.
这次越野赛跑由我们厂负责筹办@WUp!;umql!21sRN2)W。

He stumbled on the uneven ground and fell on his face.
他在不平的地面上绊了一脚，摔了个嘴啃泥HMN3HUTQM]1DO。

1.Many people said they could imagine themselves doing the cannonball jump into the mud pit.

2.Because a camera set up next to a wide mud pit captured some amazing images.

They set up many branches throughout the country.
他们在全国建立好多分公司emXx.AJaCNd@.J。
He set up a new opinion regarding the project.
他对这个规划提出了一条新的意见UYpXQe)S^-XXaRw。 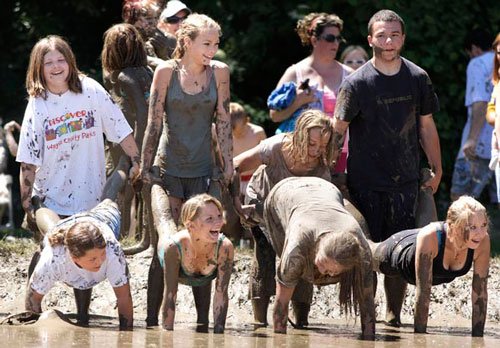