Following days of rumors, Uzbekistan has announced the death of its president, Islam Karimov aged at 78. He was previously said to be critically ill. The funeral will take place on Saturday in his home city of Samarkand.

A bomb explosion in the southern Philippines appears to have killed at least 12 people and injured many more. The blast took place in a busy night market in Davao, the hometown of president Rodrigo Duterte.

Hungarian police have recruited 3,000 officers that it described as border hunters to be deployed along to the southern frontier with Serbia. They will help bolster the 10,000-strong force already guarding the razor-wire fence to keep out migrants.

A delegation from the United Nations Security Council is in South Sudan to discuss a UN resolution to send 4,000 extra peacekeepers to the country. The South Sudanese government has described the decision as neo-colonialist.

Opposition leaders in Gabon who have been tried for 3 days in their party headquarters, have been allowed to leave. Troops surrounded the building after opponents of president Ali Bongo set the national assembly on fire.

An MP in Kenya has asked parliament to pass a law recognizing a third gender. Isaac Mwaura said this would help end discrimination against intersex people, who were born with both male and female characteristics. 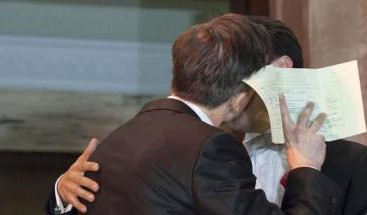 A serving British marine has been charged with terrorism offenses following a police investigation into dissident Irish republican activity in Northern Ireland. Ciarán Maxwell has been remanded in custody until his next court appearance on Monday.

A Church of England bishop has become the first to publicly declare that he is gay and in a relationship, although celibate. The revelation by the Right Reverend Nicholas Chamberlain, is likely to be embraced by campaigners for equality and alarm conservatives.

Rumor has it that he is having an affair with his secretary.
谣传他和他的秘书有暧昧关系l)AT5npq+;CeNG。

She kept vigil at the bedside of her critically ill son.
她整夜都守在病重的儿子床边bD4PKH,ajM(。

He helped to recruit volunteers to go to Pakistan to fight.
他协助招募志愿者到巴基斯坦打仗8hx~OS7p7rQWC6。

The infantry began to deploy at dawn.
步兵黎明时开始进入战斗位置RtWp+DBISqbeLLi;。

Until very recently Texas was an unsettled frontier.
就在没多久之前，得克萨斯州还是一个荒无人烟的边远地区IB4uE92R8RsW@(_。

Britain is free to adopt policies to bolster its economy.
英国可以自由制定政策以振兴经济xdtfRbqR_k。

They knew that discrimination was going on, but chose to ignore it.
他们当时知道歧视现象仍然存在，但是宁愿装聋作哑bcwPn6H3op.L5jPZNQzW。

The dissident was cast out from his country.
这位持不同政见者被驱逐出境7_2atPs+Jw]bnx。

Carter was remanded in custody for seven days.
卡特在押候审7天!O%Jjl9#NDV#。

1.They will help bolster the 10,000-strong force already guarding the razor-wire fence to keep out migrants.

Peg down netting over the top to keep out leaves.
用销钉在顶上加固防护网，防止叶子落入tOKyB]xz[=c7bw=-@4u。

2.Troops surrounded the building after opponents of president Ali Bongo set the national assembly on fire.

As I arrived a lorry had just been set on fire and was burning fiercely.
我到的时候，一辆卡车刚被点着火，烧得正猛[&*#%q3^q@。