Michel Temer Sworn In as President of Brazil
Brazil's new president has appealed for national unity after lawmakers voted to remove Dilma Rousseff from the office Wednesday.
In a speech to the nation, President Michel Temer said the vote in the Senate was open and democratic. He called it a moment of hope to reclaim confidence in Brazil. And he urged Brazilians to put the national interest above group interests.
The Senate impeachment and conviction of Rousseff ends 13 years of rule by the Workers Party of Rousseff and former president Louis Ignacio Lula da Silva.
The Senate voted 61 to 20 to end the presidency of Brazil's first female leader. She was found guilty of violating budgetary laws in an effort to improve her chances of re-election in 2014.
Rousseff faced questions about the case for 14 hours on Monday.
Her removal raises questions about the future of social programs, which are said to have lifted millions of Brazilians out of poverty.
After the vote, Rousseff called her removal an attempt to seize power and restated that she was innocent of the charges. In a statement, she said, "They (Senators) decided to interrupt the mandate of a president who had committed no crime. They have convicted an innocent person and carried out a parliamentary coup."
Mark Jones is a Latin American expert at Rice University in Houston, Texas. He told VOA that Brazil is deeply divided and faces difficult economic problems.
Jones called Temer, who had been Rousseff's vice president, a deal-maker who is willing to make compromises to get things done.
Temer's Democratic Movement Party had ruled in a coalition with Rousseff's Workers Party until now.
Jones called the charges against Rousseff comparatively minor. He said they did not involve personal enrichment or illegal payments. He added that Rousseff faced public anger over suspected corruption involving her party.
He added that had Brazil's economy been growing instead of shrinking Rousseff would likely still be in office.
I'm Jonathan Evans.

They pursued economic policies in accord with the national interest.
他们根据国家利益执行经济政策t-hInMq~mUV]e~7f。

I never realized I loved you until now.
我至今才意识到我爱你JYXvvH6TlNL0qt。

The company continued him in office for another year.
公司留他继续任职了一年vEAJB3l;i;*I)。

The Vice President and the Attorney General were immiscible.
副总统和司法部长合不来ManjN+(wiHq2J5UVy^6。

1.She was found guilty of violating budgetary laws in an effort to improve her chances of re-election in 2014.

in an effort to 企图

They hushed up the scandal in an effort to save face.
他们掩盖了丑闻以图保全面子Njt6+sUS^BIY。
The burglar menaced Ken with a knife in an effort to escape being caught.
小偷以刀子威吓肯，以免被抓Uu6SM@ErV1j。

2.They have convicted an innocent person and carried out a parliamentary coup."

These operations have been carried out according to schedule.
这些行动已按预定计划实施rZ_jn7xu#P8CT。
Who prevents their plans from being carried out?
谁阻止他们的计划，不让实施？ 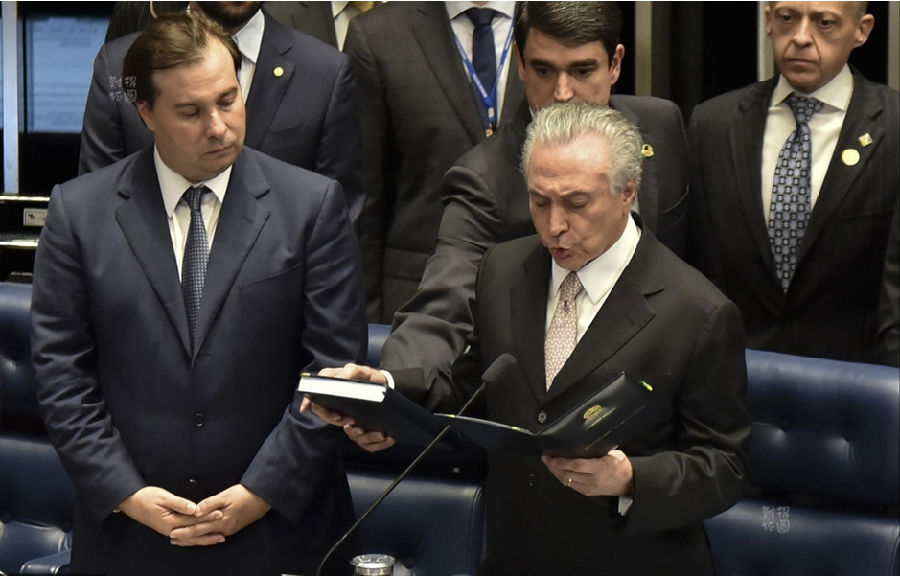