U.S. Swimmer Ryan Lochte Loses Sponsors
This is What's Trending Today.
Ryan Lochte's name stayed in the news this week, two days after the closing ceremony of the Rio de Janeiro Summer Olympics.
Lochte is the American swimmer who did not tell the truth about being robbed early one morning during the Rio Games.
Four of Lochte's sponsors said they would no longer support him. Two of the sponsors are well-known companies, Speedo and Ralph Lauren.
Speedo makes swimwear, including the suits many swimmers wore in the Olympics. Ralph Lauren made the clothing Team USA athletes wore during the opening and closing ceremonies in Rio de Janeiro.
Many companies pay money so athletes will wear their clothing, use their equipment and appear in their advertisements.
Lochte got into trouble for saying he and three teammates were robbed when men posing as police officers stopped his taxi.
But after the Rio de Janeiro police investigated the incident, it turned out that Lochte was not telling the truth. Video cameras at a gas station showed Lochte and his teammates getting into an argument with armed security guards.
Lochte and his teammates explained that they were asked to pay money for damaging property at the gas station.
But the explanation came many days after the first story they told.
In an interview, Lochte said the incident and his behavior tarnished the Rio de Janeiro Olympics "a little."
Speedo said it would donate $50,000 to a charity that supports children.
The other sponsors that ended their connection with Lochte were a hair removal company and a Japanese company that makes mattresses.
Sponsors can usually end their deals with an athlete if he or she behaves badly.
Many people on Facebook and Twitter reacted to the news. They said the moral of the Lochte story is: take responsibility for your actions, however embarrassing they may be.
Others said people should remember "what you do in the present affects your future."
And that's What's Trending Today.
I'm Dan Friedell.

The flame remains lit during the Games and will be extinguished at the closing ceremony.
在奥运会举办期间，火炬将持续燃烧，直到闭幕式上才会被熄灭p*A2O56IAV_n(z-。

I am no longer privileged to tease you.
我已经没有权力跟你逗笑了ZyTD@4xhxE。

1.Lochte got into trouble for saying he and three teammates were robbed when men posing as police officers stopped his taxi.

Their rambunctious son always got into trouble.
他们那个不受管束的儿子老是惹麻烦E9&VomtMtImGcFh。
He got into trouble with the police while he was still at school.
他还在上学时就惹是生非与警方纠缠了Z#gXGZFGlA)C24DL。

2.They said the moral of the Lochte story is: take responsibility for your actions, however embarrassing they may be. 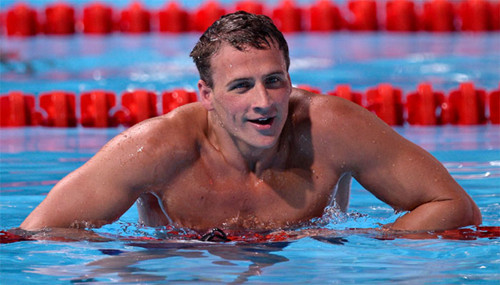