Lifelong Refugee Finds a Place to Call Home
The United Nations estimates that more than 45 million people worldwide are refugees.
For most of his life, Awadh Alsrya was a refugee. He was never a citizen of any country. Now, he finally has a place to call his home.
Alsrya became a citizen of the United States last month on July 4, American Independence Day. It was then that he, his two sons and 80 other people took the oath of citizenship at a ceremony in Charlottesville, Virginia.
Alsrya waited more than half a century before becoming a U.S. citizen.
"When I passed my (citizenship) test, I cried because this was my dream for 58 years. It was a long time. I was waiting, waiting, waiting, and waiting."
Awadh Alsrya was born in Iraq. His parents were Palestinian refugees.
Before coming to the United States, Alsrya and his family lived in Baghdad. There, he operated a successful grocery business with an Iraqi partner.
In 2003, the United States and its allies launched a military campaign to disarm Iraq. The U.S.-Iraq War was followed by outbreaks of sectarian violence.
"Every day when I open my door, I see dead bodies in the street. When I go to my store, I see dead bodies in the street. This is not life."
When Alsrya's business partner was shot and killed, and his wife was shot in the shoulder, the family got their belongings and left Baghdad.
"I closed everything. I don't need anything. I lost all my money, all my businesses. I only wanted to save my sons and my family to leave because I thought one day, one month, my sons might get killed."
He and his family came to the United States six years ago through the State Department's refugee program. They resettled in Charlottesville, Virginia.
"Believe me, the first day when I came to America, I don't know what happened from my body, I just felt this is my country."
Now, Alsrya works in a grocery store, which is similar to his former business in Iraq. His youngest son also has a part-time job there.
"I like this job. I want to give (back) America because she gave me a citizenship. I want to give her more. Until now for six years, I didn't take a vacation..."
Since becoming U.S. citizens, he and his sons have requested passports for the first time in their lives.
"May my God give me more time to live. I will give back America more, more, more, more because America helped make my dream come true."
I'm Marsha James.

Spiritualism was a fad in full flower for half a century.
唯灵论曾是一种时尚，风行了半个世纪之久K]mr3Exyus0%。

They planned out the military campaign.
他们筹划了这次军事行动09DnV%J;Nay。

Karachi has seen bursts of ethnic and sectarian violence.
卡拉奇以前也爆发过民族和派系之间的暴力事件XxB;pMrj^Y6h。

1.It was then that he, his two sons and 80 other people took the oath of citizenship at a ceremony in Charlottesville, Virginia.

Bush took oath that he would fill the office of president faithfully.
布什宣誓将忠实履行总统职责-TfvaMJ5I-e|jw@2X。
The witness took oath that he had seen the defendant leaving the scene of the crime.
他曾经看见被告离开作案现场B(-t.xO)lHu。

2.His youngest son also has a part-time job there.

She' s looking for a part-time job.
她在寻找兼职工作4+u](Cb27AoBU%Nv。
She got a part-time job to supplement the family income.
她找了一个兼职工作以补充家庭收入&qgPCn5&EAVu3。 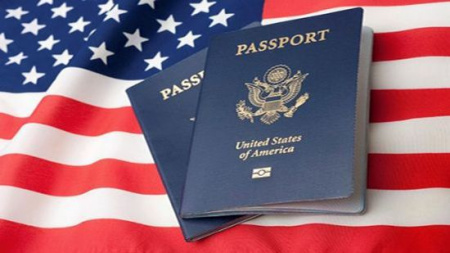