Film Shows Effort to Stop Tribes from Killing Children
Filmmaker John Rowe discovered a secret after many visits to the Omo River Valley in Ethiopia: people there thought some children were "cursed."
Villagers blamed the children for sickness, a lack of rainfall and other problems. So they killed them.
The Omo Valley is a place of beauty. It is home to villagers with customs that date back many generations.
Rowe says the villagers believe that if a child's teeth first appear on the upper gum instead of the lower part of the mouth, the child is cursed and must be killed. He says children are also killed when they are born to a woman who is not married, or if they are disabled or are twins.
Rowe heard about this belief from Lale Labuko, the man who helped him during his visits to the Omo Valley. Rowe made a documentary film about the practice. He called the film "Omo Child."
Labuko says that when he was 15 years old, he saw a two-year-old child being drowned in a river. His mother told him that he had two sisters who were killed before he was born.
In the film, a woman says 15 of her children were considered cursed. She says when they were born, older members of her village took them and fed them to crocodiles.
In the film, Labuko says "I want to stop these things."
Labuko was the first member of his village to be educated. He asked Rowe to help him end the killings. First, he persuaded some young villagers, then families and leaders of the village.
Rowe's son Tyler filmed the documentary over a five year period. He says it was not easy. He says some people admitted they had killed their children. But others said children were not killed.
Tyler says some villagers told him, "It doesn't happen here. We stopped it a long time ago. It only happens in another village, not here."
Labuko's work caused people to begin speaking out about the practice. His tribe agreed to ban the killings in 2012. Rowe's documentary shows Labuko's efforts.
A charity group created by Labuko and his wife has saved more than 40 children. They now live in a home in Jinka, Ethiopia.
The Ethiopian government has banned the practice, but Rowe says "there are two other tribes that continue to" kill children. But because of the film, more people know about the killings and the efforts of one man to stop them.
I'm Christopher Jones-Cruise.

Hard work can often make up for a lack of intelligence.
勤奋工作往往可以弥补智力的不足Xp*mY;wx;Ij%,Gc+[。

Was he born to be successful, or did he just luck out?
是他命中注定会成功，还是仅仅交了好运？

He said other things I cannot speak out for shame.
他还说了些我羞于启齿的话PI%1Q@%08#n=sANgxLW。

4.a long time ago 很久以前

He must have started writing his book a long time ago.
他一定很久以前就开始写这本书了siHvC5]RMH(Lwq7~!。

1.Rowe says the villagers believe that if a child's teeth first appear on the upper gum instead of the lower part of the mouth, the child is cursed and must be killed.

It felt like I'd had two babies instead of one
我感觉像是有两个孩子而不是一个7Xpgr(+eQx。
Why don't you play football instead of just looking on?
你为什么不参加踢足球而只是看热闹？

2.It is home to villagers with customs that date back many generations.

This tradition dates back over 200 years.
这一传统可追溯到200多年以前k^pEJCz;~A%jR.Y;。
My family has a vase, which is said to date back to Ming Dynasty.
我家有个花瓶，据说是从明代传下来的lfHQ(ln@Gy。 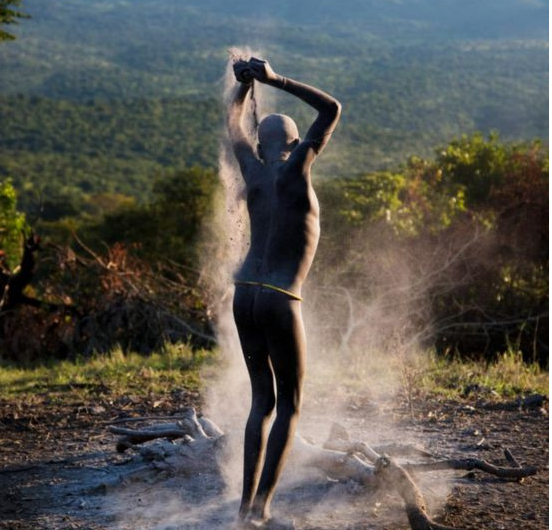