Turkish leaders are saying life will continue as normal for most people despite a state of emergency. The state of emergency, approved by Turkey's Parliament, gives more powers to Turkish President Recep Tayyip Erdogan. It allows him to expand a crackdown begun after last week's failed coup led by some members of Turkey's military. Already, thousands of people have been arrested. But Mehmet Simsek, Turkey's deputy prime minister, said most people won't see major changes in their lives. “Life of ordinary people and businesses will go un-impacted, uninterrupted, business will be as usual," he wrote on Twitter. The Parliament on Thursday voted 356-115 to approve the three-month state of emergency. Erdogan said he needs new powers to "rid the military of the virus of subversion”. The Associated Press reported Thursday that the government arrested nearly 10,000 people and closed hundreds of schools. It said 58,881 civil service workers were dismissed, forced to resign or had their licenses taken away. And academic leaders and teachers were banned from leaving Turkey. "The lynching has started," said Beyza Ustun, an official of the Kurdish-led, People's Democratic Party. Her opinion reflects the concern of Turkish minority groups of more threats to their rights. U.S. Secretary of State John Kerry criticized the coup attempt. But he also said: "We need to have Turkey respect democracy, human rights, and fundamental freedoms." President Barack Obama called Erdogan on Tuesday. He said the United States would assist Turkey's investigation of those responsible for the coup, according to the White House. But Obama also urged the Turkish president to avoid reducing public confidence in Turkey's democracy. Turkey is very important to the United States battle against Islamic State militants. It uses a military base in Turkey to conduct air attacks against IS in Syria and Iraq. Simsek, the deputy prime minister, said there could have been "carnage in the streets" if last week's coup succeeded. He said the government is going after those who organized and carried out the coup. "We owe it to our people to go after them," he said. "We will have a legal framework for it." In a televised speech to the nation on Wednesday, Erdogan said the state of emergency would protect Turkey's democracy. "This measure is in no way against democracy, the law and freedoms," he said. Erdogan has been accused of taking too much power for himself -- even before the current state of emergency. And some world leaders called on Erdogan to end the state of emergency as soon as possible. German Foreign Minister Frank-Walter Steinmeier said it is important "the rule of law" is kept in Turkey. He said Turkey should keep the state of emergency only for as long as necessary "and then immediately end it."

The problem is what do you class as normal and spam words?
但问题是，您应该如何划分正常单词和垃圾邮件单词呢？

2.allow sb to do sth 允许某人做某事

The child will not be allowed to play outside.
那么孩子将不被允许在外面玩耍=!#=8@j9)%VdbovI。

3.be banned from doing sth 被禁止做某事

I've given this some thought after an earlier column in which I wondered if children should be banned from flying.
在我写下一篇关于是否应该严禁小孩们上飞机的专栏后，又对这个问题进行了逐步思考JYlj~9a1KJs。

4.urge sb to do sth 敦促某人做某事

Johns Hopkins' Ball says he is less concerned about the Fed's ability to remove stimulus than about the possibility that it will be urged to do so while the economy is still fragile.

1.Erdogan has been accused of taking too much power for himself -- even before the current state of emergency.

be accused of sth 被指责/指控做某事

But at least Rolling Stone can't be accused of false advertising by playing the cover for shock value.
但是至少《滚石》不会因为“为了有冲击力的封面而进行错误地广告宣传”而被指责hd)EJF,,|R。

Even at her most melodramatic she can hardly be accused of bewitching a whole generation into misplacing its stiff upper lip.
即便是自责她戏剧性的历程，也很难指控戴安娜是利用她外露的感情让一代人倾倒#xGO|VSbhsLfCZ。

2.He said the government is going after those who organized and carried out the coup.

I want them to know what they actually want in life and then go after it…whatever that may be…even if means selling chalk drawings on a beach in between surf sessions.
我想让他们知道他们在生活中真正想要的什么，然后去追求...无论他们想要的是什么...即使是在冲浪季节之间在海边卖粉笔画dTp#(PuZZ,lfZJt。
Go after what you want, even though you may not believe that it is possible.
去追求你想要的，即使你可能并不相信它是能做到的SJ^-4KIcP,=z_]Mf。 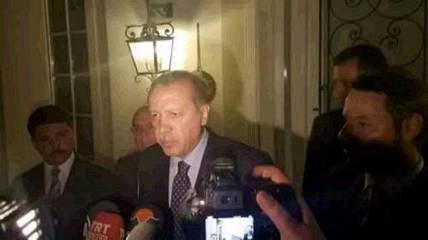