Determined, Dedicated and Disciplined to Be Fit
It would be an understatement to say that Ernestine Shepherd is in better condition than most people. The 80-year-old bodybuilder lives by the words "determined, dedicated and disciplined" to stay in the best health possible.
Yes. You heard that right. Ernestine Shepherd recently celebrated her 80th birthday. And she still works out every day. But this was not always the case, she says.
"Earlier in life, I really did not think too much about eating correctly nor exercising, but as time went on, my mind changed completely."
One day she went out shopping with her sister, Mildred Blackwell. Shepherd tried on a swimsuit. She says she did not like how it fit her. She says both women realized they were out of shape.
Blackwell suggested the sisters take a fitness class to lose weight and get in shape. So at age 56, alongside her sister, Shepherd started to exercise.
She says her sister inspired her to do more than just exercise.
"My sister was instrumental in getting me started to lift weights and to try to become a bodybuilder."
Then, in 1992, Mildred Blackwell died suddenly of a brain aneurysm. Ernestine says the loss deepened her commitment to good health. She promised to continue training as a bodybuilder to honor her sister's memory.
"After my sister's death I first couldn't really do too much of anything. I was just so upset about her death. But then finally I got myself together, decided that I would start working out and I started working out with a friend by the name of Raymond Day. And we worked out three days a week."
Later, Ernestine invested in a personal trainer.
"My trainer the former Mr. Universe Yohnnie Shambourger. Wow, did he work me and get me into shape...Then after training with Yohnnie Shambourger I did my first bodybuilding show."
And, she won her very first competition.
A call from the Guinness Book of World Records followed a short time later.
"Yohnnie got a call from the Guinness Book of World Records stating they thought I was the oldest female competitive bodybuilding in the world, but they would have to check it."
Ernestine Shepherd holds the 2010 and 2011 title in the Guinness World Records as the World's Oldest Performing Female Bodybuilder.
Shepherd runs every morning. She lifts weights three times a week. She says she keeps a balanced diet of proteins and carbohydrates such as chicken and rice. She also drinks lots of water.
And she gets support from Collin, her husband of 52 years. He helps prepare her seven small meals a day.
Shepherd says her lifestyle changes cured her of several health conditions.
"Physical activity in my later years has helped me, because at one time I suffered with high blood pressure, panic attacks, acid reflux. Oh, you name it. I had it. After I started working out everything changed for me. No more high blood pressure medicine. No more panic attacks. No more acid reflux. Exercise is not work, it's fun. It's a joy."
Shepherd still competes in body building events. She also works as a fitness trainer and professional model. And, this year, she became an author. Her book, "Determined, Dedicated and Disciplined To Be Fit," came out in April, just before she turned 80.
Shepherd says she wanted to let people know, especially older people, that it is not too late to get healthy.
And, the author shares a secret about aging.
"If ever there was an anti-aging pill you will have to call it exercise."
I'm Marsha James.

Tuesday and Thursday I have my fitness class, though.
星期二和星期四我要上健身课=*#Z~S&d%3vmd。

She' s starving herself trying to lose weight.
她用节食疗法试图减肥c_)Wjt]7nC)。

With the rapid development of fitness clubs, fitness trainer groups are gradually on the rise and prosper.
随着健身俱乐部的高速发展，健身教练群体逐渐兴起和壮大H77iDVv2k6^。

1.She says she keeps a balanced diet of proteins and carbohydrates such as chicken and rice.

2.Physical activity in my later years has helped me, because at one time I suffered with high blood pressure, panic attacks, acid reflux.

The city at one time must have been prosperous.
这座古城肯定一度很繁荣Z%_58G3A=5|@。
The two continents were connected by a land mass at one time.
这两个大陆曾经由一大片陆地连接着7#|V!g@CDMg&i。 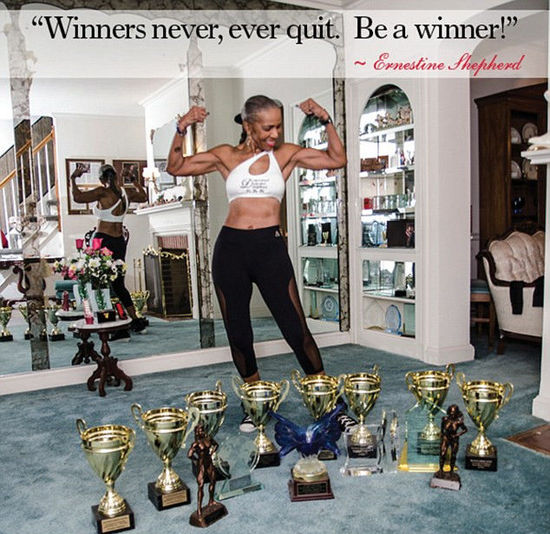