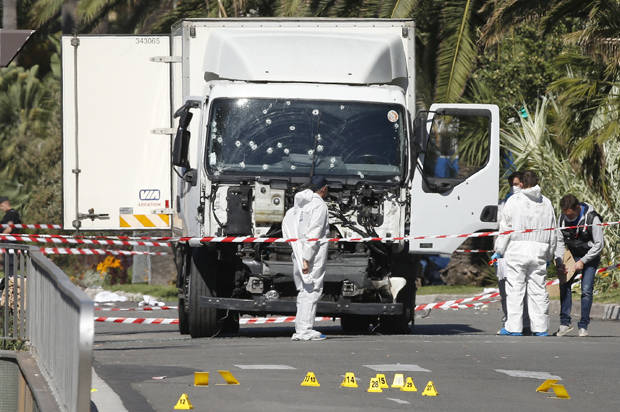 More than 70 people are reported to have been killed in an attack in the southern French city of Nice. A lorry drove at a high speed into a crowd watching a Bastille Day firework display. The Nice prosecutor says the vehicle continued for two kilometers before police shot the driver dead. As Andy Mohr now reports the crowd had to run for their lives. There was panic at the end of the Bastile Day celebrations since the trcuk mounted the crowd pavement on the Promenade des Anglais. According to witnesses the driver swerve several times to hit as many padestrians as possible. French authority say the driver was killed. There are reports he got out of his vehicle and started shooting. Television images from the scene showed the window of his truck riddled with bullets. Colin Srivastava was in Nice when the attack unfolded. We were basically sitting just in front of the Old Town in Nice and saw several hundred people running towards us looking panic stricken. We tried to ask a few of them what the hell was going on and finally got one that said, You need to go, the police have told us to run.
Colin Srivastava ending that report by Andy Mohr. The regional president and former mayor
of Nice Christian Estrosi says it was clearly a deliberate attack. It was an individual whose behaviour was totally premeditated, totally planned, and he drove into the crowd, he shot the police. The lorry was loaded with weapons. It was loaded with grenades. Prosecutor say anti-terror officers have taken over the investigation. President Francois Hollande is holding a crisis meeting in Paris. The attack came just hours after President Hollande announced that the state of emergency in France would end later this month. It had already been extended twice since the Paris attack by Islamic Militants in November and a further three months extentsion have been approved but the president said it would not make sense to keep the measure in place indefinately. World leaders have condemened the attack. Laura Becca has this report from Washington. President Barack Obama condemned what he said appeared to be a horrific terrorist attack in Nice. He said his thoughts and prayers are with the families and other loved ones of those killed. He prays the extraodinary resilience and democratic values that have made France an inspiration to the entire world and offered French officials any assistance that they may need to investigate the attack and bring those responsible to justice.
A spokesman for the British Prime Minister Theresa May said she was shocked and concerned by the scene from Nice. The president of the European Council Donald Tusk said it was a tragic paradox the people celebrating liberty, equality and fraternity were attacked. This is the latest world news from the BBC.
In other news Donald Trump has told an American TV channel he has not yet made a final decision on a running mate. Media report suggest the Republican presidential candidate will name Mike Pence the governor of Indianna and a member of the right-wing tea party movement. Mr.Trump was due to make a announcement in New York on Friday but he postponed a news conference following that attack in Nice.
An Appeals Court in New York has ruled that US government can not force Microsoft to give authorities access to the firm's servers located in other countries. The decision has been seen as a precedent for protecting the privacy of cloud computing services.The US Department of Justice had wanted to access a server in Ireland as part of an investigation into a drug case.
The US Secretary of State John Kerry has been having talks in Moscow with Russian leaders on what US media say our controversial proposals for the two countries to coordinate their military operations against Islamic militants in Syria. The State Department said that they discussed the need to increase pressure on Islamic State and the Al-Nusra Front fighters. But the White House spokesman Josh Earnest said there was no guarantee that the two countries would work together. At present, the United States is not conducting, or coordinating military operations with Russia. And there is some speculation that an agreement may be reached to do so, but it's not clear that will happen.
UNESCO said that at least half of young people aged between 15 and 17 in Sub-Saharan Africa are not in school, the highest rate for any region in the world. More than 93 million children in primary and secondary school age in sub-Sahara Africa don't receive formal education. Conflict, poverty, and resistance to educating girls are some of the reasons given. BBC World News.

例句：Bob needs the fraternity of others who share his mission.
鲍勃需要与他共同肩负这项使命的其他人的友爱互助XiORWiAq4xLBVQ。

1.Television images from the scene showed the window of his truck riddled with bullets.

例句：The darkness saved me from being riddled with bullets.
身处黑暗中让我不至于被子弹打得浑身是洞W2X+A-A-a,s93+2。

2.The decision has been seen as a precedent for protecting the privacy of cloud computing services.

例句：We all know why the concept of cloud computing excites us.
我们都知道为何云计算概念让我们兴奋S*WV@u!Tlnwr,n7*(.j。