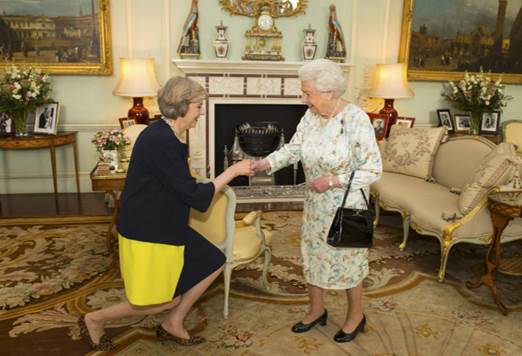 The woman who will be Britain's next Prime Minister has promised to make the country's exit from the European Union a success despite backing the remain campaign in last month's referendum. Theresa May who is currently Home Secretary was confirmed as the new conservative party leader after her sole remaining rival Andrea Leadsom withdrew from the contest. Norman Smith reports. Although Theresa May was the clear favor to succeed David Cameron even she probably never anticipated events would move quiet so swiftly. Instead of taking over in September, Mrs.May will now become Prime Minister on Wednesday evening. A rapid handover that became almost inevitable as soon as Mrs.Leadsom announced her decison to quit. This afternoon, at the meeting of conservative MPs, Mrs.May was officially confirmed as the new leader of the conservative party.
Both sides involved in the latest outbreak of violence in South Sudan have declared a ceasefire after days of fighting in the capital Juba left hundreds dead. The fighting which enforces loyal to president Salva Kiir and those commanded by his long-standing rival the vice president Riek Machar has been threatening to undermine the peace deal signed last year to end two years of cicil war. The UN Secretary General Ban Ki-moon said a variety of measures could be taken to contain the violence. Important immediate arms embargo on South Sudan. Second, enact additional targeted sanctions on leaders and commanders blocking the implementation of the agreement. Third, fortifying the UN mission in South Sudan (UNMISS). We desperately need attack helicopters and other material to fulfil our mandate to protect civilians.
The Venezuelan government has said it will seize a factory belonging to the US hygiene product company Kimberly-Clark after it annouced that it could no longer operate in the country. Our America's editor Candice Piat reports. The Labor Minister Oswaldo Vera said the closure of the factory was illegal and it was seeking to restart production at the request of almost thousands of workers. Kimberly-Clark is the latest multinational to close or scale back operations in the country. The company cited strict currency controls, a lack of primary materials and soaring inflation. A growing opposition blamed President Nicolas Maduro of racking the oil rich economy and seeking a referendum to remove him.

The police chief in US city of Dallas has said that Texas state laws which allow civilians to carry firearms openly are causing a problem for law enforcement. David Brown was speaking following the fatal shooting of five police officers last week by a former army reservist. He said officers who saw people carring rifles initially believe they were under attack by multiple shooters. World news from the BBC.
Police in the US state of Michigan say a gunman who opened fire in a courthouse was a prisoner who stole the gun from the law enforcement officer. The man killed two bailiffs and injured a civilian and a sheriff deputy. He was then shot dead by officers.
The Isreali parliament has passed a controvertial legislation that requirs Non-Governmental Organizations to give details of overseas donations if more than half of their funding comes from foreign government or institutions. Opponents of the bill say it's discriminatary and aimed at curbing funds flowing to Palestanian courses from sources such as the European Union. Its sponsor the far-right Justice Minister Ayelet Shaked calls it a transparency bill. In Israel in general, we are not interfering in politics of other country and I expect countries will respect Israel and we try to influence on Israeli diplomatic path and not by a funding millions of dollars of Euros to NGOs that usually try to promote their views. Private money going to Jewish body supporting settlement on occupied land is not covered by the legislation.
Archaeologists have found evidence of ancient stone tools used by monkeys in Brazil. The discovery is the latest example of non-human tool used in numerous species from apes to crows. Victoria Gill reports.
A determined monkey bring the face-sized stone down onto a cashew nuts. This is from the footage captured by the researchers in Brazil. In a national park where they unearthed evidence that the capuchin monkeys here have lived in their own stone age for at least 700 years. The scientist found stone hammers stained with centuries-old cashew nuts liquid burried beneath the trees where these dextrous primates still practice their very effective nuts cracking technique. The discovery dates the behavior to long before Europeans arrived in the new world. BBC news.

例句：The woolly spider monkey is the largest primate in the Americas.
绒毛蛛猴是美洲最大的灵长类动物bUh#i=UTUl。

例句：From somewhere, he had unearthed a black silk suit.
他不知从哪里找来了一套黑色的丝绸衣服1@c3Zk3S.am=SWu。

例句：The elections are mandated by a peace accord signed by the government last May.
选举是在去年5月政府签署的和平协议的授权下进行的Wdj%9Q&6@D4j。

例句：The handover is expected to be completed in the next ten years.
移交预计在下个10年内完成5Xd*ek(_row。

1.Theresa May who is currently Home Secretary was confirmed as the new conservative party leader after her sole remaining rival Andrea Leadsom withdrew from the contest.

例句：I don't know if he will withdraw from the race.
我不知道他是否将退出比赛[2j,qRWp)T%iAg^q。

例句：She withdrew $50 from her savings account and bought a gift for her friend.
她从储蓄账户上取了50美元给朋友买了礼物acz6W)RxUbF*。

2.The Venezuelan government has said it will seize a factory belonging to the US hygene product company Kimberly-Clark after it annouced that it could no longer operate in the country.

例句：She no longer feared that they should misunderstand her.
她不再害怕他们会误解她了lSxOwjvVRc。

例句：The enemy on the right flank is now like a spent arrow and no longer a threat to our position.
右翼的敌人已经是强弩之末， 不能再威胁我们的阵地了p#@@t29T6bWK_^2)G。