Theresa May to Be Britain's Second Woman Prime Minister
Britain's Theresa May is set to become the second woman to hold the position of Prime Minister since Margaret Thatcher.
British Prime Minister David Cameron announced on Monday that he will resign Wednesday and Andrea Leadsom, May's rival for the position, abruptly withdrew.
Cameron told reporters he would officially offer his resignation to Britain's Queen Elizabeth on Wednesday.
The prime minister announced his intention to resign last month after Britons voted in a referendum to leave the European Union. Cameron had campaigned for Britain remaining in the EU.
Theresa May, 59, has served as Home Secretary in Cameron's cabinet since 2010. May had been campaigning in a race to lead the Conservative Party against Energy Minister Andrea Leadsom.
But Leadsom withdrew after she made comments highly criticized by the media and her party. In the comments, Leadsom suggested she was better qualified to be Prime Minister because she is a mother. May has no children.
Speaking outside his residence at 10 Downing Street, Cameron said he was "delighted we are not going to have a prolonged leadership contest." He praised May for being "strong, competent and more than capable of taking on the role of prime minister."
During last month's referendum, also referred to as "Brexit," May campaigned for Britain to stay in the EU. Since the vote, she has pledged to help pull the country out of the bloc.
Speaking outside parliament, May said she was "honored and humbled" to be chosen the party's new leader.
She said she is prepared to provide "strong, proven leadership to steer us through what will be difficult and uncertain economic and political times." She added that Britain needs "to forge a new role for ourselves in the world."
May will be in charge of overseeing the country's complex transition out of the EU. She said her goal is to "negotiate the best deal for Britain in leaving the EU."
"Brexit means Brexit, and we're going to make a success of it," she said.
I'm Bryan Lynn.

Canada's Prime Minister is the counterpart of the U.S. President.
加拿大总理相当于美国总统QM&%t.Smiw4R#,rNp。

The European Union is nothing short of a miracle.
欧盟是一个不折不扣的奇迹k(KYcw,uXG*MqcfmM。

He served as gardener and as chauffeur.
他兼做园丁和车夫Jq|x](E*(NK9+P1ZoP。

The chief engineer was in charge of directing the building of the subway.
主任工程师负责指挥地铁的建造工程bv*JKG*h.~p。

1.He praised May for being "strong, competent and more than capable of taking on the role of prime minister."

The insect can take on the color of its surroundings.
这种昆虫能随环境而变色LS*^HKo7Ox。
I shall take on the work with humility and dedication.
我要以谦逊和献身的精神，从事我的工作|^UQ^CGd2kq*y。

2.During last month's referendum, also referred to as "Brexit," May campaigned for Britain to stay in the EU.

We shall refer to this force as the driving force on the particle.
我们把这个力叫做作用在粒子上的驱动力f!bMHzbJ(s8qBs0k。
We often refer to these books in our work.
我们工作中经常参考这些书x(19GOH=wX#%I8ykza。 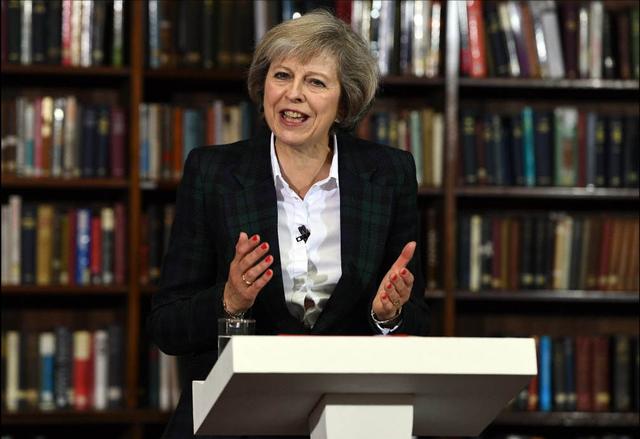