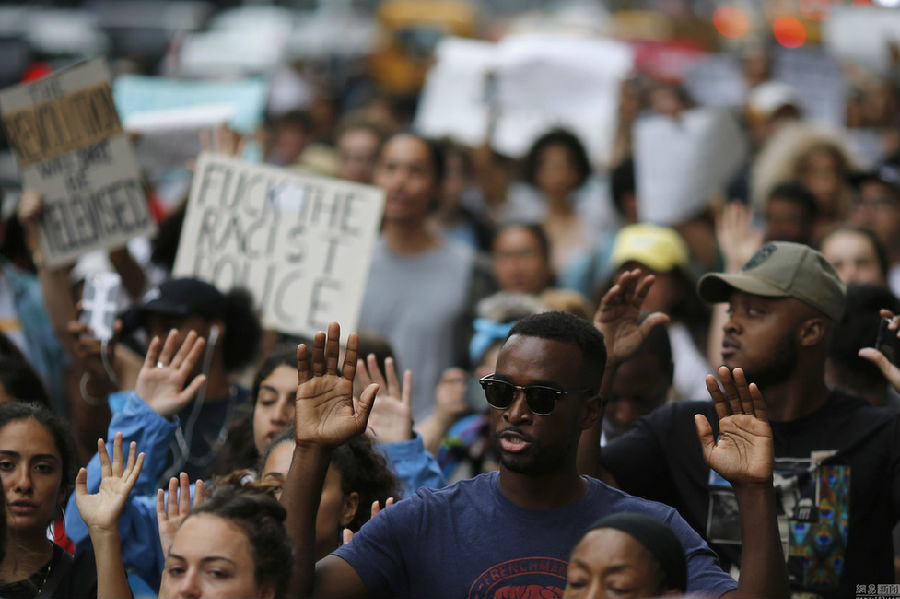 US media reports say two police officers have been shot at a protest rally against police violence in Dallas, Texas. Several shots were fired. Demonstrations have been held in several cities against the shooting dead of two black men by white police officers in recent days. The organiser of the Black Lives Matter rally, Reverend Jeff Hood, told the Dallas Morning News what he saw as shots were fired. I was leading the protest. I was, you know, right there with another officer. I heard what sounded like six to eight shots. I saw people scramble. The officer ran towards the shots. I ran away from the shots trying to get people off the streets. And I was grabbing myself to see if I was shot. President Obama said the earlier shootings of the two black men in Louisiana and Minnesota should cause all Americans to be deeply troubled.
There's been another major bomb attack in Iraq on a Shia holly site north of the capital Baghdad. The authorities say more than 30 people have been killed and many more injured. David Bamford has the latest. The suicide bomber and gunmen launched their attack on the Shia Mausoleum of Sayid Mohammed bin Ali al-Hadi in the town of Balad. After the bomb exploded close to the gate, reports say several gunmen stormed the site and opened fired on the worshippers celebrating the Eid festival. The attack comes less than a week after almost 300 people were killed in the city's worst single bombing since the 2003 war in the busy mainly Shia shopping district of Karrada. IS said it was responsible.
The authorities in Saudi Arabia have arrested 19 suspects, 12 of them Pakistani, following the suicide bomb attack on the Prophet's mosque in Madina on Monday. Yusuf Taha reports. An interior ministry spokesman identified the bomber as Na'ir al-Balawi, a 26-year-old Saudi national with previous convictions for drug abuse. Four policemen were killed when he detonated his explosive belt. The spokesman also named the suspects in two suicide attacks which happened on the same day in the mainly Shia city of Qatif in the eastern province. The bombing in Madina drew worldwide condemnation including from Shia Iran, which called for international effort to defeat terrorists.
The former head of the army in Chile, General Juan Emilio Cheyre, has been detained for alleged involvement in the killing of 15 people in the aftermath of the 1973 military coup. General Cheyre, who was a young officer when General Augusto Pinochet seized power, was accused of complicity in the killing of left-wing activists in the northern city of La Serena.
The controversial Brazilian politician who led the impeachment process against President Dilma Rousseff has resigned from his post as speaker of the lower house of Congress. Eduardo Cunha had been accused of diverting millions of dollars in the state oil company Petrobras to personal accounts in Switzerland. He denies the charges. BBC News
The Colombian government has said that the total area used for the production of coca, the raw material for cocaine, has increased by 39% in one year. The Defence Minster Luis Carlos Villegas said the decision to suspend crop spraying because of health concerns was one of the main reasons for the surge. He announced new measures to tackle the illegal crops.
Poland's centre-right government has rushed an amended version of its constitutional court reforms through parliament just hours before Warsaw hosts the Nato summit. The government hopes that changes would appease its Western allies, who have expressed concern that the Polish government is failing to respect democratic checks and balances. The opposition says the reforms don't go far enough and still give the government too much influence over the constitutional court.
France, the host of the Euro 2016 football tournament, have made it to Sunday's final where they will meet Portugal. They beat the reigning world champions Germany by 2-0 in the second semi-final. Alex Capstick reports. This was vengeance for France. The nation has waited 58 years for victory over Germany at a major football tournament. And how fitting the cycle was broken at the Stade Velodrome. There have been so many painful defeats over the years. The French won't mind a beast that for long periods they were dominated by the world champions. Antoine Griezmann, the player of this championship, provided the stardust. His two goals, the first a controversial penalty, the second the results of comical German defending, propelled his team to Sunday's final. Alex Capstick reporting from Marseille. BBC News

例句：Political leaders are making no progress in their efforts to resolve the country's constitutional crisis.
政治领袖们在解决国家宪法危机方面没有取得任何进展(sk14q,3P*=q。

例句：They want to divert the attention of the people from the real issues.
他们想要把人们的注意力从真正的问题上转移开(8h@G~Yf&-(~E0[*q[。

1.Eduardo Cunha had been accused of diverting millions of dollars in the state oil company Petrobras to personal accounts in Switzerland. He denies the charges.

2.Poland's centre-right government has rushed an amended version of its constitutional court reforms through parliament just hours before Warsaw hosts the Nato summit.

例句：In practice , the Law Committee fulfils the duties of a constitutional court.
宪法委员会实际上履行了宪法法院的责任cp8ufZG&FVQs|Gv。

例句：A Romanian judge has asked for a Constitutional Court ruling on the law.
一位罗马尼亚法官已经请求宪法法院就该法作出裁定f=WO-Q)O9!+2zuL+N。