Lionel Messi Receives 21-Month Prison Sentence
This is What's Trending Today:
Lionel Messi is known for escaping defenders on the soccer field.
But he was not able to escape a conviction for tax fraud in Spain this week.
A court in Barcelona, Spain, sentenced the Argentinian soccer star to 21 months in prison on Wednesday.
Messi plays for Barcelona's soccer team during the club season. He is the five-time winner of FIFA's player of the year award.
Investigators in Spain said they found evidence that Messi and his father, Jorge, hid money that should have been taxed by the Spanish government. The younger Messi earned the money from 2007 to 2009.
Tax inspectors said over $4 million of Messi's money went to accounts in Uruguay, Switzerland and Belize.
Messi was fined over $2 million. His father was fined about $1.5 million. Jorge Messi was also sentenced to 21 months.
Neither man, however, is expected to spend any time in prison. In Spain, first offenses carrying sentences of less than two years are usually suspended.
Both Messis told the court they did not think they were breaking any laws.
The news about Messi was one of the top trending topics around the world on Facebook and Twitter on Wednesday. People made their feelings clear about Messi's actions.
Zaheed Sabur used Facebook to say: "you already have more than you can ever spend. Shame on you Leo Messi!"
And, many people questioned why Messi could not pay his taxes like everyone else.
And that's What's Trending Today.
I'm Dan Friedell.

The soccer team had won no games, but it hadn't lost heart.
足球队虽然没赢过一场球, 但并没有使队员们气短b89&21#D%K*IVyj_2mso。

If you break law again, you will get into trouble.
你若再违反法律，你会弄出大麻烦的r2-mDpMr0=_。

1.Lionel Messi is known for escaping defenders on the soccer field.

It's less than five minutes' walk to a shopping mall．
走路不到五分钟就有成片的商店LN2VisfG1Ia%,S)qZ#9。
He is no less than fifty centimetres round the middle.
他的腰围不小于五十公分CVreXq435t@HC%-;RF#r。 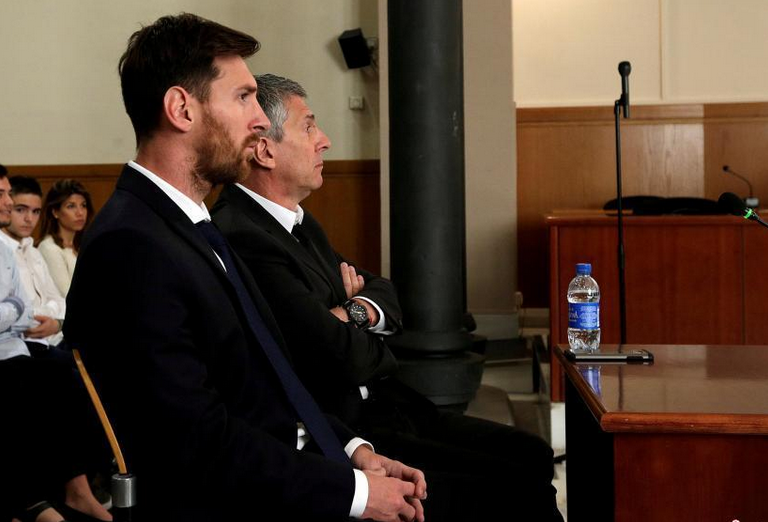