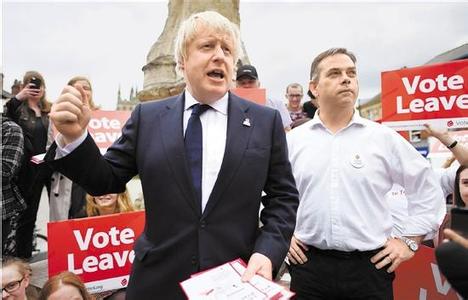 The contest to become the leader of Britain's governing Conservative Party and Prime Minister has taken a dramatic twist, with the man widely-tipped for the post Boris Johnson pulling out of the race. The decision of Mr. Johnson, the most prominent figure in Britain's campaign to leave the European Union, shocked the political establishment, as our political editor Laura Kuenssberg reports. The biggest name bows out. Whether it's treachery or tragedy, Boris Johnson, known universally for his desire to become Prime Minister, has quit the race, and not even a week since the referendum results. It has unleashed a day of bitterness and recrimination inside the Conservative Party. There are several accounts of exactly what happened. Suggestions that Mr.Gove has been plotting for months, fiercely denied. Allegations that Boris Johnson was not getting enough support from MPs, that's Gove act too. But the only certainty, perhaps, is that a group of senior Tories who, for years, have seen themselves as in charge of the party's destiny, are at total odds with each other.
The European Union's Trade Commissioner Cecilia Malmstrom has said that Britain can only begin negotiations on a new trade deal with the E.U after it has left the bloc. In a BBC interview, Ms Malmstrom suggested a long process of protracted talks lay ahead. The actual relationship between us and the United Kingdom in the future will not be negotiated in Article 50. That is the terms of exit. So there are actually two negotiations. First, you exit. And then, you negotiate the new relationship, whatever that is.
Researchers say they've found the first clear evidence that the thinning of the ozone layer above Antarctica is starting to heal. Their findings, published in the journal, Science, show that in 2015, the hole in the ozone layer was around 4 million square kilometres smaller than five years earlier. The reduction has been credited to the long-term phasing out ozone-destroying chemicals, which were widely used in refrigerators, sprays and air-conditioning.
A judge in the United States has ordered the retrial of a convicted murdered, whose case featured in Serial a hugely-popular podcast, which cast out on the evidence presented at the original trial. From Los Angeles Peter Bowers. Adnan Syed has been serving a life sentence since being convicted 16 years ago of killing Hae Min Lee, who was a former classmate. At a court hearing earlier this year, Syed's lawyers argued that a crucial alibi witness and questionable mobile phone records were wrongly overlooked by his original defence lawyer. Now, a judge has said the lawyer rendered ineffective assistance, when she failed to cross-examine the prosecution expert about the evidence. The judge said he'd been swayed by new evidence uncovered by a spin-off podcast called Undisclosed, which followed up the story, after Serial became the most popular podcast of all time. World news from the BBC.
The U.S. military has confirmed that it's ended its ban on transgender individuals serving openly in the armed forces. The Defence Secretary, Ashton Carter, said he wanted to remove barriers to serving unrelated to people's abilities or qualifications. He said the armed forces needed to employ all available talent.
Two Israelis have been wounded in a knife attack by a Palestinian, just hours after a 13-year-old Israeli girl was stabbed to death in her home. Israeli police say that one of those wounded is in a serious condition. The attack happened in the city of Natanya.
Commemorations are taking place to mark the 100th anniversary that started the Battle of the Somme, one of the bloodiest encounters of the First World War. Thousands were killed on the first day of the battle. An overnight vigil is being held at the Thiepval War Memorial in northern France. Our correspondent Lucy Williamson is there. As night fell, they gathered on the monument to the battle's missing men, royalty, political leaders, and the relatives of those who've fought here and died. They came to remember a battle that began with the deaths of almost 20,000 British soldiers and which left more than a million dead or wounded on both sides by its end. After music and readings written by those who saw the battle firsthand, soldiers from nations that once fought here began a rotating guard that will continue throughout the night.
The first of the quarter-final matches at the Euro 2016 football tournament has been won by Portugal. That was the reaction of thousands of Portuguese supporters in the Lisbon fan zone when the moment of victory came. Portugal beat Poland 5-3 on penalties, after the game ended 1-1 after extra time. Portugal will meet either Wales or Belgium in the semi-final. BBC News.

例句：The country appears to be violating several articles of the convention.
这个国家看起来违反了公约中的好几项条款R#I%U4wt5_4qx7=D。

例句：What are the different challenges for male-to-female and female-to-male transgender people?
男跨女和女跨男两种跨性别者面临的不同挑战么？

例句：The star witness for the prosecution took the stand.
原告律师传讯的主要证人站到了证人席上aDBTvt+2i3aszveJ。

The bitter rows and recriminations have finally ended the relationship.
激烈的争吵和相互指责最终为他们的感情画上了句号R(zLTXn]G%gE,H.klvH。

1.The reduction has been credited to the long-term phasing out ozone-destroying chemicals, which were widely used in refrigerators, sprays and air-conditioning.

例句：They said the present system of military conscription should be phased out.
他们说现行的征兵体系应该逐步淘汰E(,_@80L7*。

例句：They phased out my job in favor of a computer.
他们逐步用一台计算机淘汰了我的工作d!qH]El&07,Lo。

2.The biggest name bows out.

例句：He had bowed out gracefully when his successor had been appointed.
他在继任者被任命后体面地引退了&9@zK#=qiF)a,d[|PCc。

例句：She has finally decided it's time to bow out of international tennis.
她最终认定是退出世界网坛的时候了;!!M1XB#9*j]+(rODRX。