'Finding Dory' Movie Audience Surprised in California
This is What's Trending Today:
The movie "Finding Dory" is one of the most popular currently playing in the United States. It is the sequel to the successful film from 2003, called "Finding Nemo."
It is an animated movie about a fish named Dory, who is looking for her parents.
Disney made "Finding Dory" with very young children in mind. Most of the people who attend the movie are parents and young children.
Before "Finding Dory," however, a theater in California played the trailer for a different film by mistake. It is film for grown-ups called "Sausage Party."
"Sausage Party" is an animated movie about what happens to the food we buy in the grocery store once we get it home. Even though it is a cartoon, it has a lot of adult jokes and is not for children.
In the movie, sausages, bread, carrots and potatoes all have voices and personalities.
The food items are friends in the grocery store. They talk about how excited they will be when a shopper buys them and brings them home. But the vegetables, peanut butter and spaghetti do not know they will later be eaten by humans.
Some of the scenes in the trailer used words that parents did not want their children to hear. Other scenes showed the "death" of food items – like a potato that screams as it is peeled before being dropped into boiling water.
The news about the theater's mistake came out in late June. The vice president of the movie theater, located near Oakland, California, apologized. The theater has multiple screens, he said.
"Finding Dory" was so popular, the theater scheduled a last-minute showing in a theater that had been playing a movie made for adults.
The "Sausage Party" trailer was supposed to be shown before a different movie, not with "Finding Dory."
After the news came out, the grown-up version of the "Sausage Party" trailer is up to 8.5 million views on YouTube. The version of the trailer that is safe for all ages now has almost 1 million views.
One person enjoyed hearing about the mistake. That is actor Seth Rogen, whose voice is in "Sausage Party."
He wrote: "This made my day."
And that's What's Trending Today.
I'm Dan Friedell.

You can see movies in a movie theater.
你可以在电影院里面看电影1J|QdM&F#!LU6E。

There used to be a grocery store on the corner.
以前在这个街角有家杂货店j=*|a)fq=EEH[bZu;6V。

Even though me were friends, he acted like he didn't know me at all.
尽管我们是朋友，他表现得好像根本不认识我Gie36Wx5zHvkA~&&。

1.It is an animated movie about a fish named Dory, who is looking for her parents.

I' m turning out the cupboard to look for a lost key.
我翻腾衣柜找丢失的钥匙;%;y%yWYMWuW=t@|k,。
The child knelt down to look for a coin he had dropped.
小孩跪下找他掉的一个钱币p|&(-CXI7Z^1I。

2.After the news came out, the grown-up version of the "Sausage Party" trailer is up to 8.5 million views on YouTube.

His latest work came out with a bang.
他最近出的一本书很受欢迎r@&(Gi.Uk6j8y。
Furious, he came out on the terrace.
他怒不可遏地走到平台上来vgvW8o.F-#6x。 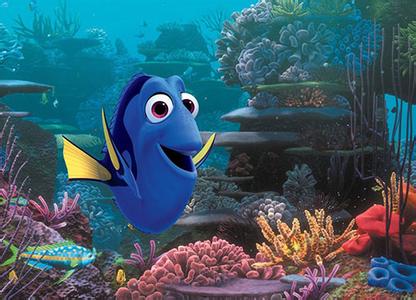