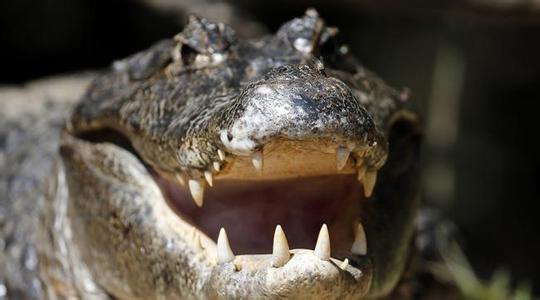 Police in Florida say they’ve recovered the body of a two-year old boy who was killed by an alligator during a holiday at Disney World. The child was snatched as he played on the shore of a lagoon and was dragged into the water despite1 his father’s efforts to save him. His body was found by divers. Julian Martial asked the wild life expert and photographer why there was an alligator in an ornamental lagoon.
People don’t understand every fresh water, body of water in the State Florida can be a potential home to an alligator. There are over a million alligators in the State of Florida now. And people are actually finding them in their swimming pools in the backyard. So man-made or natural, alligators don’t decide for the difference and they can occupy them. And people need to understand when you see these bodies of water in the State of Florida now, you almost need to assume there is an alligator in it.
And would the alligator have attacked the child, dragged the child into the water knowing it was a human?
No, absolutely not. This alligator was… They are opportunistic feeders. This was a recipe for disaster that we had a small child, that could have easily been you know, a large raccoon for the alligator waiting in water in the dark in night time. This is just an alligator instinctively feeding on what was made available to it. I’m sure it grabbed that child, brought him underwater, and disposed the child that way, but it was not the intent to kill a human being. It was the intent just to get food that normally could be anything else.
I mean you’ve mentioned alligator numbers, is it a time to start culling them?
Well, they do have an alligator hunt in the State of Florida. This is one of those conservation projects that’s been so successful that they actually have a hunt every year. They cull a significant number of them. People need to learn how to live with them and that is something that can be done. Unfortunately we have too many people, you know, a lot of them are tourists who don’t know better that think you know these animals are pets or think they are… You know, they wanna get a close picture. I wanna say, what are you thinking? Because they don’t understand these are wild animals. So hopefully, people will understand that and then try to learn a little bit more that way. It’s a matter of education.
These “No swimming” signs need to say “No swimming because there could be an alligator in here”. Maybe that puts a little more emphasis on the danger.
Prince William has become the first member of the royal family to pose for the cover of a gay magazine. The second in line to the British throne told Attitude Magazine that Lesbian Gay Bisexual Transgender people should be proud of who they are. Our royal correspondent Peter Hunt told me why the Prince had agreed to feature on the cover.
Well he has decided and agreed to be photographed by Attitude, a gay magazine in the UK.

例句：He came to the meeting despite his serious illness.
尽管病得很重，他还是来参加了会议iy|vaTSOf1@WY9)2I。

2.a recipe for disaster 被用来指一连串事情迟早会出错、惹麻烦、给人带来小不幸或让人出丑；造成灾难的因素；后患无穷

例句：I just hope the people who committed this monstrous evil will be able to live with themselves.
我只是希望犯下这种骇人罪行的人能承受良心的谴责--D0o7sK,E74l,=。

例句：Have you been drawing on the walls? I thought you were old enough to know better.
墙上是你画的吧？我还以为你都长大懂事了呢(W1tPaeW@QT*(WL。

例句：We really put emphasis on independence. But dependence is a biological fact.
我们过多地强调独立，但是依赖是一个生物学的事实U3SH%xFhAb4zxmlg5~EG。

1. This is just an alligator instinctively feeding on what was made available to it.

例句：Birds feed on nuts and berries in the winter.
鸟类靠坚果和浆果过冬@|#0o]Sf33Oe4T%O3nTL。

2.So hopefully, people will understand that and then try to learn a little bit more that way. It’s a matter of education.

例句：Observance of the law is a matter of principle for us.
守法是我们的一个原则问题Sm-0Sr||T5WGLbv。