Did Brazil's Planning Minister Plot Against Rousseff?
Brazil's planning minister resigned from office on Monday after a recording of him was made public.
The recording appears to show Romero Juca plotting the impeachment of now-suspended President Dilma Rousseff. He reportedly was talking with a former oil company official about how to stop a corruption investigation.
Juca denies the allegations. He claimed that the words he said were taken out of context.
On Monday, the planning minister said he would temporarily resign from the acting government. He had been in office less than two weeks.
The Brazilian newspaper Folha published a partial transcript of the recording on Monday. The Reuters news agency reports that the paper said the recording was made "secretly."
In it, Juca and the former oil company official, Sergio Machado, discuss a government investigation of the state-operated oil company Petrobras. Both men have been named in the investigation.
In the transcript, Juca said "We have to change the government so the bleeding is stopped."
Machado reportedly said that, "The easiest solution is to put Michel in." That appears to refer to Vice President Michel Temer, Brazil's acting president during the suspension of Rousseff.
Juca is reported to have said he was working with the country's justices, who have the final word on impeachment.
The recording was apparently made in March before the Senate voted to impeach Rousseff.
Rousseff's supporters say the recording shows that she is the victim of an attempt to overthrow the government.
The Brazilian Senate voted to place Rousseff on trial earlier this month. She is charged with using record-keeping tricks to hide Brazil's budget deficit when she campaigned for reelection in 2014.
She currently is suspended for up to 180 days while her trial takes place.
I'm Jonathan Evans.

When they will come hasn't been made public.
他们什么时候来还没有宣布dt~#-fN=uLEGCaBL。

Tryptophane also appears to be useful in easing pain.
色氨酸似乎还具有镇痛的作用gfdHVtz]F5M。

Don't quote my words out of context.
别断章取义地引用我的话]2iU|2muwgfxGKKT2B^。

The company continued him in office for another year.
公司留他继续任职了一年ep7Liz_iEag。

1.Machado reportedly said that, "The easiest solution is to put Michel in."

He put in a liberal supply of coal for the winter.
他储存了足量的煤以便过冬()Lhz;@u(jF4am)Nl。
You put in these pension plans.
你们制定了这些养恤金计划lb=;Ldj]W5LeeMiSXTk。

2.Juca is reported to have said he was working with the country's justices, who have the final word on impeachment. 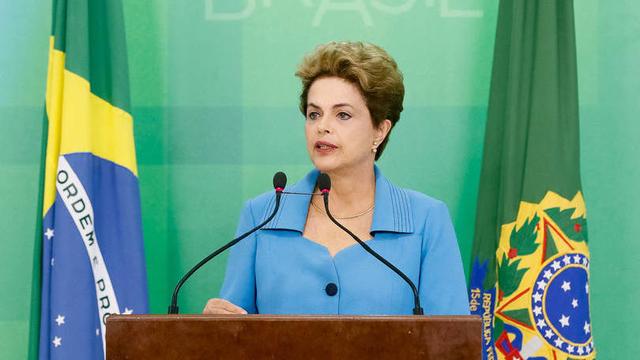