200 Families Feared Buried in Sri Lanka Landslides
More than 200 families are reported missing in central Sri Lanka after landslides.
Heavy rains caused the slides which buried three farming villages near the town of Aranayaka in Kegalle district. The Sri Lankan Red Cross said rescuers had found 180 people so far. It also said 14 bodies were recovered.
Local civilians joined police and hundreds of soldiers in digging through the mud with their hands, sticks and shovels to search for survivors. Officials halted the operation when night came. The search and rescue effort is to re-start in the morning.
Continuing rain, heavy fog and electrical outages in the area interfered with the search work. Officials warned that the rain could cause additional landslides.
The Red Cross said that some people listed as missing may have left the area earlier after warnings of possible landslides.
One woman, 70-year-old A.G. Alice from the village of Siripura, said she did not know where any of her nine children are.
In the same village, a man said four members of his family were in the same house when the landslide hit. He said he cannot find any.
A government official said hundreds of people escaped the disaster. The official said they are being treated for minor injuries.
Villagers said they began hearing and seeing the huge piles of mud and debris crash around their homes Tuesday afternoon.
"I heard a huge sound like a plane crashing into the earth," said 52-year-old A.G. Kamala. She had just returned to her home in Siripura village. "I opened my door. I could not believe my eyes, as I saw something like a huge fireball rolling down the mountain and again a huge sound."
The rain has caused flooding in areas across Sri Lanka, including the country's capital Colombo. Officials said about 135,000 Sri Lankans had to flee their homes and are now in temporary shelters.
Sri Lanka's Disaster Management Center said lightning strikes and smaller landslides also killed at least 11 people over the past few days.
I'm Bryan Lynn.

They were detained for two weeks by the heavy rains.
他们被大雨阻滞了两个星期+GfSXGw4TySR。

So far the message has not been read.
这个信息至今未被辨认出来@0an4jeM-!niOq#vI。

Two men volunteered to search for the missing climber.
两个人自告奋勇去寻找那位失踪的登山运动员ty0NxR7AO9。

1.Continuing rain, heavy fog and electrical outages in the area interfered with the search work.

2.The official said they are being treated for minor injuries. 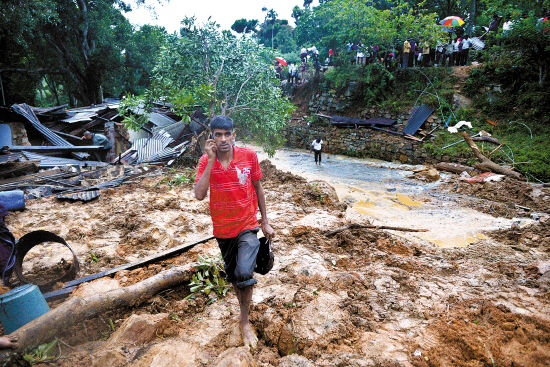