Burnings Bring Attention to Asylum-Seekers in Australian Camps
A 21-year old Somali refugee is critically injured after setting herself on fire on Nauru, a tiny South Pacific republic.
Australia operates a detention camp on the island.
Some people are criticizing Australia for its refugee policy. However, Australia has said refugee supporters are putting pressure on migrants to harm themselves for the attention it will bring.
The 21-year old refugee Hodan Yasin has been taken to a hospital in the Australian city of Brisbane. She is in a critical condition after setting herself on fire Monday.
Refugee advocates say the injured woman was distressed after she was sent back to the South Pacific island. Before this incident, she had received medical treatment in Australia for injuries from a road accident.
Last week, a 23-year old Iranian asylum seeker died after he set himself on fire at the migrant center on Nauru.
It is one of two camps operated by Australia as part of a policy to stop asylum seekers from reaching its northern waters by boat. Even if detainees are found to be refugees, they are not permitted to resettle in Australia.
Australian Greens party Senator Sarah Hanson-Young says her country is not supporting people who need help.
"They have been found to be refugees, therefore they deserve to be looked after and given an opportunity to rebuild their lives. We should not be having languishing on Nauru even now, let alone for years and years to come. We should end this suffering and bring these people to Australia and allow them to get on with their lives."
Australian Immigration Minister Peter Dutton has accused refugee supporters of increasing tensions on Nauru. He says they have encouraged migrants to take extreme measures to try to force Australia to change its border protection policies.
Australia sends Asylum seekers trying to reach Australia by sea to either Manus Island in Papua New Guinea or to Nauru.
Officials in the capital Canberra say the policy has reduced the steady flow of migrants trying to reach Australia by boat.
Last week, the government of Papua New Guinea said it would close the Australian facility on Manus Island after the country's Supreme Court ruled it illegal.
Also, media reports say a boat carrying Sri Lankan asylum seekers has reportedly arrived on the Cocos Islands, an Australian territory in the Indian Ocean. If the arrival is confirmed, it would be the first refugee ship to have reached Australian waters in almost two years.
I'm Mario Ritter.

The building was set on fire yesterday.
这座大楼昨天着火了rG62c6aR|(1^Z#~ru^L。

Fewer than 7% of asylum seekers are accepted as political refugees.
寻求避难者中有不到7%的人被视作政治难民h5.PnCqGfqa。

The Commission had also been involved in a campaign to raise public awareness about immigration and refugee policy.
委员会还参加了提高公众对移民和难民政策的认识的运动H.tyek1t9&fXhp8Z。

He spent six months in a detention camp on an island off the coast of Italy.
在意大利远离海岸的小岛上，他在拘留集中营里呆了六个月+5VvP9w-|..%#zSl)。

1.He says they have encouraged migrants to take extreme measures to try to force Australia to change its border protection policies.

We should take measures adapted to local conditions so as to improve our work.
我们应当采取因地制宜的措施，以便改进工作Wn-,]wBjSP*#Uv。

The government is urged to take measures to combat the spread of aids.
人们敦促政府采取措施以防止艾滋病的传播0~GmkpulMD。

2.She is in a critical condition after setting herself on fire Monday.

The doctors managed to resuscitate her, but she remained in a critical condition.
医生们设法让她苏醒，但她始终处于危急状况k^k=dtA5WL。

He remains hospitalized, in critical condition, with severe pneumonia.
他患有严重肺炎现在医院就医，情况危机9d5hG5iB%nKas|@KpE7o。 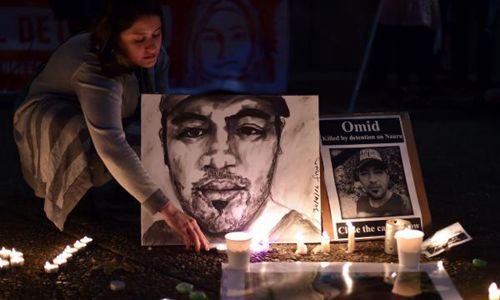