Second Quake Hits Japan
A second powerful earthquake struck southern Japan early Saturday.
The quake caused the Japan Meteorological Agency to give and then cancel a tsunami warning for the area.
The magnitude 7.0 earthquake struck near the city of Kumamoto on the island of Kyushu. Magnitude is a measure of the energy released during an earthquake.
Rescue workers have been searching wreckage from an earlier 6.5 magnitude earthquake that hit the same area Thursday.
More than 100 aftershocks have been felt since then.
An eight-month-old baby girl was trapped in a house damaged by the earlier quake. Nearly 50 rescuers were involved in the effort to pull the child from the rubble early Friday.
About 1,600 soldiers have joined nearly 2,000 police officers and 1,300 firefighters in the recovery effort.
Japanese government spokesman Yoshihide Suga said Friday that the quake killed at least nine people and injured more than 800 others.
The quakes have destroyed houses and damaged roads. Damage was severe in the town of Mashiki. Eight of the dead lived in the town, which is about 1,300 kilometers southwest of Tokyo.
Japanese officials said no damage was reported at nearby nuclear power centers.
Television reports of the first earthquake showed fires and interviews with Mashiki residents.
"The whole house shook violently sideways," Takahiko Morita, a Mashiki resident, said to one broadcaster. "Furniture and bookshelves fell down. Books were all over the floor."
Aftershocks have slowed the recovery efforts. Water service was stopped in some areas, forcing some people to bring water from offices to their homes.
I'm Mario Ritter.

Rescue workers rushed to the site of the plane crash.

His good performance in school does great credit to his mother.

1.Nearly 50 rescuers were involved in the effort to pull the child from the rubble early Friday.

In addition to my studies, I got involved in lots of extracurricular activities.

He is involved in gambling and prostitution rackets.

2.Furniture and bookshelves fell down. Books were all over the floor.

She fell down on the way to work.

The old lady fell down in adoration before Buddhist images. 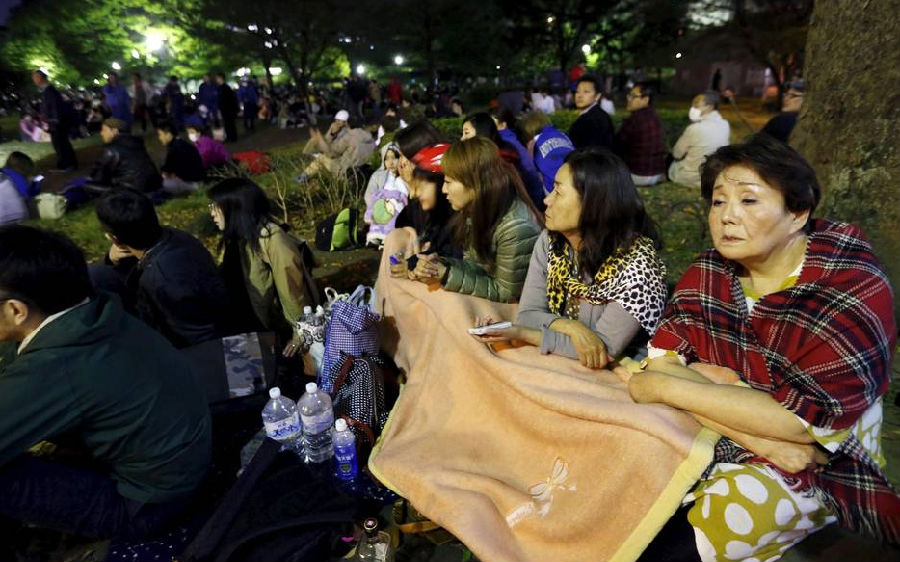