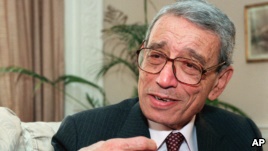 This is What's Trending Today....

Boutros Boutros-Ghali was the United Nations Secretary General in the first part of the 1990s.

He died in Egypt on February 16. He was 93. His name became one of the top trending topics worldwide on Twitter on Tuesday.

An Egyptian newspaper, al-Ahram, reported Boutros-Ghali died due to complications from a broken pelvis. An Egyptian diplomat, Boutros-Ghali was elected to a five-year term as U.N. Secretary General in 1991.

The Washington Post wrote Boutros-Ghali presided over the U.N. during two of the world's worst genocides.

Hundreds of thousands of people from the Tutsi and Hutu ethnic groups in Rwanda were killed during his term. Boutros-Ghali called it, "my worst failure."

The New York Times called his term "a chaotic period."

It was marked by diplomatic conflicts with the United States over Bosnia and a failed raid in Somalia that resulted in the death of 15 Americans. The event was documented in a film called "Black Hawk Down."

The Washington Post also noted there were regular disagreements between the U.S. and the U.N. over unpaid dues, totaling close to $1.5 billion.

After leaving the U.N., Boutros-Ghali wrote in his memoir of the difficulty in dealing with American President Bill Clinton. He wrote, "His mocking pronunciation of my name – Boo-trus, Boo-trus – sounded like a jeering mob."

While there were many tweets and messages of support for Boutros-Ghali's family upon the news of his death, there were also some references to his unique name.

One person wrote "God, I loved that man's name."

Others were quick to reference a viral video that Boutros-Ghali appeared in after his term ended.

Boutros-Ghali did an interview with comedian Sacha Baron Cohen. Baron Cohen was known in the late 1990s and early 2000s for playing a character called Ali G.

Cohen, as the loud, ill-informed street personality Ali G, interviewed celebrities and politicians on his television show. Many of them were flustered by his act, but Boutros-Ghali was praised for handling the interview with poise.

One complication which can arise is a prolapse.
可能出现的一种并发症是脱垂ivWvXaX(4kn(YSG!-]。

The single pyramid projects well into the renal pelvis.
单个锥体明显凸入肾盂mxIJT);6#BR@2Q&x。

The club members voted with one accord to raise the dues.
俱乐部成员一致通过提高会费X^+5aVJ5AYWaWou。

She gave a mocking smile.
她嘲讽地笑了笑ZCqv]nRspV)n[hd+。

I am ill-informed on current affairs.
我对时事了解不多x5RC6-n1s=。

The General refused to be flustered.
将军没有被搅得慌乱不安[JD+s5*M-_tDC。

1.The Washington Post wrote Boutros-Ghali presided over the U.N. during two of the world's worst genocides.

The PM presided over a meeting of his inner Cabinet.
首相主持了一次核心内阁会议t=7uR,gGD#&r@Vh。

The city council is presided over by the mayor.
市政会议由市长主持]Q8.lVGPw^~XU。

2.Many of them were flustered by his act, but Boutros-Ghali was praised for handling the interview with poise.

Wavell received the decision with poise and dignity.
韦维尔以安祥持重的态度接受了这项决定1ir2w7%3lesq1tZNy35(。

She received the news with poise.
她泰然自若地接受那消息^ps7+.ffLBMGiRg21]O(。