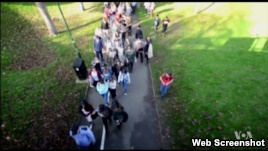 Nearly 24 million children around the world are unable to attend school because of conflict.

That is what UNICEF, the United Nations Children's Fund, said recently. UNICEF officials studied 22 countries affected by conflict. The UN agency found that "nearly one in four of the more than 109 million kids of primary and lower secondary school age, who live in conflict zones, are missing out on their education."

Lisa Bender is an education specialist with UNICEF. She says not only are more children affected by conflict, but conflicts are lasting longer.

She adds that children are missing important years for learning.

"We're primarily talking about the key ages between six and 15. So this doesn't even count children who are missing early learning opportunities. We're really talking about primary school through lower secondary school: the key years for learning."

The results, Bender says, are that children are not able to get the skills they need to survive.

"We mean that they won't have the skills that they need to access the job market. They won't have the basic skills that they'll need to negotiate life. In countries where we have seen children access education in small villages, in Afghanistan, for example, where I visited, these children play a crucial role in negotiating contracts for their parents; being able to understand how to get good prices at the local market. So, we're talking about daily living skills, as well as the long term skills they need to become future teachers and doctors and leaders of their country."

If children grow up without these skills, Bender says, countries suffer in the long term. Economies and public health could worsen, while girls become more vulnerable to sex abuse.

Conflicts are fueling huge population movements in some areas, including the Middle East. Syria is the country largely driving Europe's migrant and refugee crisis.

Lisa Bender says Syria once had most of its boys and girls in school. Now, she says, it is difficult to get information on the subject.

"We've seen many children in Syria who are now not able to attend school because of the conflict. But there's been such a huge population movement, as you know, into the surrounding countries. And now with the European migrant crisis that it's hard to say exactly how many of those children are accessing learning opportunities -- if they're formal or non-formal. We're doing our best to provide services with many partners for these children, but it's very hard to get a specific number."

UNICEF says Africa's newest nation, South Sudan, is at the top of the list of countries where conflict is disrupting education. Over half of its children, 51 percent, are out of school.

Niger and Sudan are also near the top of the list. UNICEF says Afghanistan has made progress. But 40 percent of its children are out of school.

UNICEF and its partners are calling on donors and governments to help make education a major part of humanitarian efforts in conflict zones.

"We need to shift our attitude from saying we'll get back to school when things calm down to saying that we can't afford to let education stop."