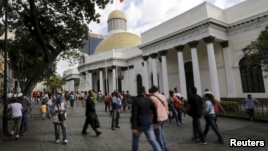 Oil-rich Venezuela appears to be entering a time of political instability.

The conflict between the socialist government of President Nicolas Maduro and the opposition-controlled National Assembly is worsening.

The three give the opposition enough votes in the assembly to remove Supreme Court justices. With their votes, the assembly can also write a new constitution and permit citizens to vote on legislation.

Sean Burges studies South American politics. He is a researcher at the Australian National University. He says the best that can be hoped for now is that both sides will understand that the conflict can be an opportunity to reach agreement.

He says the president and the opposition need to work together to improve the economy, which has been in a recession. The country is also suffering from high inflation, a shortage of goods, rising crime and falling oil prices.